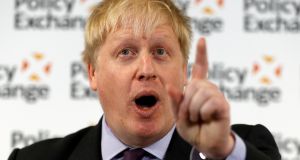 Boris Johnson. “We have wrapped a suicide vest around the British constitution – and handed the detonator to Michel Barnier,” he wrote in the Mail on Sunday. Photograph: Peter Nicholls/Reuters

Boris Johnson’s characterisation of the Border backstop as a constitutional suicide vest for Britain is irresponsible and demonstrates a misunderstanding of Irish history and politics, Labour’s shadow Brexit secretary, Keir Starmer, has said. Sir Keir, who is visiting Dublin on Monday and Tuesday, was among the politicians from all parties, including Conservative ministers, to condemn the former foreign secretary’s words. “Those that downplay the significance of the Border are on the one hand irresponsible and on the other hand simply don’t understand the significance of the Border in terms of what the open Border signifies in terms of the peace process,” he told The Irish Times.

Writing in the Mail on Sunday, Mr Johnson described Theresa May’s Chequers proposal as a humiliation for Britain, which looked like a seven-stone weakling being comically bent out of shape by a 500lb gorilla. “And the reason is simple: Northern Ireland, and the insanity of the so-called ‘backstop’. We have opened ourselves to perpetual political blackmail. We have wrapped a suicide vest around the British constitution – and handed the detonator to Michel Barnier. We have given him a jemmy with which Brussels can choose – at any time – to crack apart the union between Great Britain and Northern Ireland, ” he wrote.

Home secretary Sajid Javid said Mr Johnson should think carefully about his language and foreign office minister Alan Duncan said he would try to ensure that the comments marked the political end of the former foreign secretary. “For Boris to say that the PM’s view is like that of a suicide bomber is too much. This marks one of the most disgusting moments in modern British politics. I’m sorry but this is the political end of Boris Johnson. If it isn’t now, I will make sure it is later,” Mr Duncan said.

Labour has joined the Conservative government in rejecting the EU’s draft protocol on the backstop, which would create a single regulatory area on the island of Ireland and treat Northern Ireland as part of the customs territory of the EU. Sir Keir said that Labour’s proposal for a customs union with the EU and alignment with single market rules for goods and services would make the backstop unnecessary.

Writing in The Irish Times today, the Labour politician, a former director of public prosecutions who spent five years as a human rights adviser to the Northern Ireland Policing Board, says the Border was ignored during the Brexit referendum campaign.

“But while the biggest challenge of Brexit may lie in Ireland, so can the solution. Labour has always emphasised that the only acceptable Brexit deal is one that builds a close future partnership with the EU based on values of co-operation, collaboration, shared prosperity and common rights,” he writes.