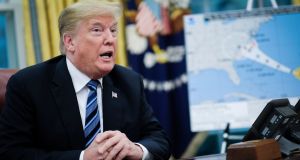 US president Donald Trump speaks to reporters on the status of Hurricane Florence in the Oval Office of the White House, Washington, DC. Photograph: Pete Marovich/The New York Times

US president Donald Trump on Thursday disputed Puerto Rico’s official death toll of 3,000 from last year’s Hurricane Maria, bristling at criticism of his administration’s handling of that disaster as another hurricane barrelled towards the southeast of his country.

The Republican president went on to accuse Democrats of inflating the death toll to make him look bad, without providing evidence.

Puerto Rico’s official death toll from Hurricane Maria, the most powerful storm to hit the Caribbean island in almost a century, was raised last month from 64, a number widely discounted as far too low, to nearly 3,000, based on a study ordered by the governor of the US territory.

3000 people did not die in the two hurricanes that hit Puerto Rico. When I left the Island, AFTER the storm had hit, they had anywhere from 6 to 18 deaths. As time went by it did not go up by much. Then, a long time later, they started to report really large numbers, like 3000...

Damn it: this is NOT about politics this was always about SAVING LIVES. pic.twitter.com/SjwywKN3Jh

“When I left the Island, AFTER the storm had hit, they had anywhere from 6 to 18 deaths. As time went by it did not go up by much. Then, a long time later, they started to report really large numbers, like 3,000,” Mr Trump wrote on Twitter.

The tweets drew the ire of Carmen Yulín Cruz, the mayor of San Juan who has sharply criticised both the president and his administration’s response to the storm last year that devastated the US territory.

“This is what denial following neglect looks like: Mr Pres in the real world people died on your watch. YOUR LACK OF RESPECT IS APPALLING!” she wrote on Twitter.

The Puerto Rico report found that an estimated 2,975 deaths could be attributed directly or indirectly to Maria from the time it struck in September 2017 to mid-February of this year. – Reuters