Prague and Warsaw back Hungary over threat of EU censure 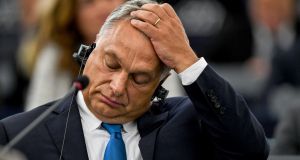 The Czech Republic and Poland have backed Hungary after the European Parliament launched disciplinary proceedings against Budapest for threatening democracy and the rule of law with its treatment of migrants, NGOs and media and academic freedoms.

The ballot on Wednesday was a blow to the standing of Hungarian prime minister Viktor Orban, who saw many supposed allies in the European People’s Party vote to condemn his hard-line policies.

He may draw some comfort from the support of other Eurosceptic, anti-immigration administrations in Prague and Warsaw, while looking ahead to next week’s visit to Moscow, when he could play up his good relations with Russian president Vladimir Putin – another populist strongman who doesn’t get along with the EU.

Czech premier Andrej Babis on Thursday condemned the Article 7 proceedings against Hungary, and similar measures that are under way against Poland’s government for undermining the country’s judicial independence.

The billionaire tycoon said these “attacks” were “nonsense that just bring negative sentiment into the European Union”.

“Instead of pulling together, people are just playing politics. This is of course just politics, taking place ahead of the European elections [next year],” he added.

“So I stand behind Orban, we are allies ... And as for some absurd proposal by MEPs who won’t be there in a year’s time, then I’m sorry that our people voted the way they did,” he added of Czech MEPs who supported action against Hungary.

“We have a problem with Brexit, and if Europe continues to divide, then it’s bad.”

Poland’s foreign ministry, meanwhile, said it “would vote against any possible sanctions to be imposed on Hungary within the European institutions”.

Article 7 proceedings can culminate in sanctions being taken against an offending state, with the suspension of its EU voting rights being one option.

That requires unanimous approval from all member states, however, and Poland and Hungary have vowed to shield each other from any punishment. They accuse Brussels of overreaching its powers and meddling in their affairs.

“Each EU member state has a sovereign right to carry out the internal reforms that it considers appropriate,” Poland said.

“Measures taken against member states lead only to the deepening of divisions within the European Union, by increasing the current distrust of citizens in European institutions.”

Croatian premier Andrej Plenkovic said the vote “was not the right way” to handle questions about Hungary.

“If there is a serious problem, and to some extent we do understand and share some of the concerns mentioned in the report, the right way would be to go through the European Commission, and not the European Parliament.”

Hungary’s feeble and fractious opposition parties enjoyed a rare chance to gloat over Mr Orban, who was elected for a third successive term in April with a crushing two-thirds majority.

While claiming that the European Parliament vote broke EU rules, Hungarian foreign minister Peter Szijjarto looked ahead to Mr Orban’s visit to Russia next Tuesday, when he is expected to discuss energy deals and again call for an end to EU sanctions on Moscow.