Saudis called Khashoggi ‘sacrificial animal’ as they waited to kill him

‘Joints will be separated, it will not be a problem,’ journalist’s killers were assured 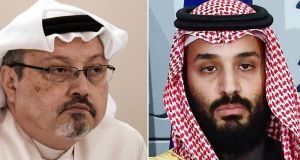 As the killers waited for the victim, the Saudi postmortem specialist reassured them that dismembering the body would “be easy”.

“Joints will be separated,” he said. “It will not be a problem.” Then, as the minutes passed, a Saudi intelligence officer asked whether the “sacrificial animal” had finally arrived.

That “animal” was Saudi dissident Jamal Khashoggi, a Virginia resident and Washington Post columnist, and the exchange between the Saudi operatives as they waited to ambush and kill him last October was among the many details disclosed on Wednesday in a United Nations report on the case.

Within a day, the report said, new teams of Saudi operatives were already working diligently to thwart investigators and cleanse the crime scene – the Saudi consulate in Istanbul – including setting a fire in a barrel outside that may have been used to destroy evidence.

“Credible evidence,” the report found, points to “the crime scenes having been thoroughly, even forensically, cleaned”. All the while, the kingdom’s de facto ruler, Crown Prince Mohammed bin Salman, professed ignorance of Khashoggi’s fate.

“We are very keen to know what happened to him,” the crown prince said in a television interview three days after the killing. But the destruction of evidence “could not have taken place without the crown prince’s awareness”, the report concluded.

The kingdom’s current secret trial of 11 Saudis in connection with the killing lacks credibility, the report said, and may be an effort to deflect blame from the most senior figures behind it.

The report, by Agnes Callamard, the special rapporteur on extrajudicial executions for the United Nations human rights agency, makes the most detailed and authoritative case to date that responsibility for the killing of Khashoggi and its cover-up lies at the highest levels of the Saudi royal court.

Drawing on extensive access to surveillance by Turkish intelligence agencies and the accounts of Turkish investigators, the report finds that “credible evidence” justifies the “investigation of high-level Saudi officials’ individual liability, including the crown prince’s”.

It urges further criminal investigations both by the UN and, because of Khashoggi’s status as a US resident, the Federal Bureau of Investigation. Western intelligence agencies have already concluded that bin Salman ordered the killing. But the report may present a new challenge to US president Donald Trump, who has embraced the crown prince as a pivotal ally and sought to avoid blaming him for directing the murder.

“Maybe he did and maybe he didn’t!” Trump said last November. White House officials have since repeated that they were awaiting the results of Saudi Arabia’s own investigation, which Callamard dismissed as a potential “miscarriage of justice”.

Outraged by Khashoggi’s killing, the US Senate and House of Representatives passed a resolution to end US military assistance for Saudi Arabia’s war in Yemen and to curtail Trump’s war powers. But the president vetoed it in April.

Responding to the new report, Adel al-Jubair, the Saudi minister of state for foreign affairs, said in a statement that the report offered “nothing new” and only “reiterates what has been published and circulated in the media”.

He argued that unspecified “unfounded allegations” undermined the credibility of the report, and he insisted that the kingdom’s own courts were “the only relevant authority in dealing with this case”. Callamard’s report, however, said that the Saudi trial had been “clouded in secrecy and lacking in due process”.

She called on Saudi Arabia to suspend the trial altogether. The court has not publicly disclosed the names of the defendants, the accusations against them nor the evidence in the case. But Callamard said that some of the 15 members of the Saudi assassination squad identified by Turkish authorities had not been charged.

On top of that, the report said, the defendants do not include other Saudi officials sanctioned by Western governments in connection with the killing – most notably Saud al-Qahtani, a top aide to the crown prince, and Mohammed al-Otaibi, the Saudi consul general in Istanbul.

The new report also highlights for the first time al-Otaibi’s role in organising the killing, detailing a level of co-ordination that makes it hard to depict the killing as an unauthorised or a rogue operation. In the days before the killing, the report notes, al-Otaibi sent two consular officials for a “top secret mission” to Riyadh, instructing them to buy aeroplane tickets for their families in order to disguise their travel as a family vacation but to disclose the trip to no one, not even to their families.

To accommodate the incoming operatives, al-Otaibi then helped book hotel rooms in Istanbul with sea views, apparently to disguise their travel as vacation as well. And on the eve of the killing, the report said, he was recorded instructing his staff to stay away from the area around his office.

“A commission” from Saudi Arabia “will have something to do on my floor in the office”, he told subordinates, and “their work inside will take two or three days”, the report said.

Starting as early as the next day, successive teams of Saudi officials with forensic expertise began to arrive, apparently to remove incriminating evidence while Saudi diplomats held Turkish investigators at bay, the report notes. When the investigators finally examined the crime scene for genetic material or other evidence, the reports notes, the Turkish detectives reported finding it suspiciously immaculate.

“Even in a normal room, we would expect more reactions,” one investigator said, according to the report. Evidence of a professional cleanup, Callamard said, suggested “that the Saudi investigation was not conducted in good faith, and that it may amount to obstructing justice”.

Although representatives of some foreign governments have been invited to attend the trial in Saudi Arabia, the report said, they have been required to commit to nondisclosure agreements, preventing them from reporting or commenting on the proceedings.

“A shadowy presence of international observers cannot, although clearly meant to, lend credibility to eminently problematic proceedings,” the report said. It argued that the presence of foreign diplomats could make them complicit in the “miscarriage of justice”.

Khashoggi disappeared after visiting the Saudi consulate in Istanbul on October 2nd to obtain papers that would have enabled him to marry his Turkish fiancee, Hatice Cengiz, who was waiting outside. Saudi officials said at first that Khashoggi had left the consulate alive and denied any knowledge of his whereabouts.

But they later admitted that he had been killed in the building after what they said was a botched mission to bring him back to Saudi Arabia. A “local collaborator” disposed of his body, Saudi officials have said, but it has not been found.

“Mr Khashoggi’s killing constituted an extrajudicial killing for which the state of the Kingdom of Saudi Arabia is responsible,” and may also have been an act of torture under international treaties, Callamard wrote. “His attempted kidnapping would also constitute a violation under international human rights law.”

Callamard also called on the international community to impose targeted sanctions on Saudi officials suspecting of being involved in the murder, including bin Salman. The sanctions should focus on the prince’s personal assets abroad “until and unless evidence has been produced that he bears no responsibility for the execution of Mr Khashoggi”.

Callamard is to present her findings to the UN Human Rights Council in Geneva next week in a session that will also be addressed by Cengiz, Khashoggi’s fiancee.

Callamard coupled her recommendation with a scathing assessment of Saudi Arabia’s actions after the killing. She said that Saudi Arabia did not respond to her requests to visit the kingdom and did not reply to questions she submitted. The Turkish authorities gave her only limited access to evidence, allowing her to listen to about 45 minutes of the seven hours of recordings they had of Saudi officials in the period around Khashoggi’s death.

Despite such obstacles, her report presents a damning picture of meticulous Saudi preparations for dealing with Khashoggi that began as soon as officials knew when he would visit the consulate. Callamard said she did not have evidence indicating who ordered the crime.

“What I do present is information that points to the potential responsibility of individuals and that is what needs to be investigated as a next step.” Even if a high-level official did not order the killing, she added, “that did not mean that they are not responsible and do not have liability” for it.

She expressed concern about the possibility that Saudi Arabia might take similar actions in the future. Since Khashoggi’s killing, she said, there have been credible reports of continuing rights violations, including torture and arbitrary detention, and threats against Saudi dissidents abroad. – New York Times