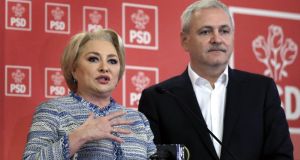 Romania’s leaders have clashed over the country’s readiness to hold the EU presidency from January, with president Klaus Iohannis claiming government affairs had “gone off the rails” as it tries to push through controversial judicial reforms.

Concern deepened over Romania’s first spell in the presidency when its minister for European affairs, Victor Negrescu, abruptly resigned at the weekend after a reportedly tense government meeting about preparations for the six-month term, which is set to be dominated by Britain’s planned departure from the EU.

Earlier, Romanian premier Viorica Dancila said EU commission president Jean-Claude Juncker had urged her government and its opponents to call a “truce” to ensure that the nation’s deep political divisions did not disrupt its presidency.

“My opinion is that we are not prepared for this,” Mr Iohannis declared.

“A few weeks ago, I said we would do it reasonably well, but in the meantime things have gone off the rails – the government does not know who is responsible for what, and the people who should be dealing with this are resigning or being sacked,” he told a meeting of Romanian mayors on Monday.

Mr Iohannis then turned his fire on Ms Dancila and the boss of the ruling Social Democrats (PSD) Liviu Dragnea, who runs the government from behind the scenes because convictions for fraud and vote-rigging prevent him holding office.

“I believe it is politically necessary to replace the accident of Romanian democracy that is the Dragnea-Dancila government,” Mr Iohannis said, warning that his country was “in the eleventh hour and totally unprepared” for the presidency.

“There is no prospect of good governance and involvement in European affairs. This is very serious,” he added.

The government shot back on Tuesday at Mr Iohannis, who opposes its efforts to decriminalise certain graft offences and overhaul the justice system with a reform programme that has sparked major street protests and warnings from the US and EU.

“These statements are bad for Romania, I think they are unprecedented in an EU member state and I ask everyone, including the president, to stop this because Romania needs consensus and unity,” Ms Dancila said.

“Mr Juncker emphasised that if we want to be successful, there must be consensus between the president, parliament and government . . . As prime minister I assure you that Romania is ready” for the presidency, she added.

Mr Dragnea, meanwhile, accused Mr Iohannis of being “irresponsible” and “obsessed” with attacking the government.

The EU fears Romania’s criminal justice reforms resemble moves by populist governments of Hungary and Poland to weaken the rule of law.

The European Parliament on Tuesday approved a resolution saying it was “deeply concerned” about Romania’s justice reforms, and the European Commission released a very critical report that accused Bucharest of backtracking on anti-corruption efforts.