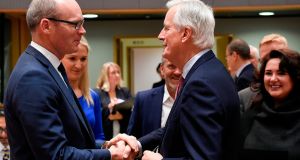 Tánaiste Simon Coveney and EU chief negotiator Michel Barnier spoke of intensifying negotiating efforts during a meeting in Brussels on Monday, with Mr Coveney stressing that this is a particularly important week for Brexit talks.

Neither would be drawn on the detail beyond repeating that there are still crucial differences, notably on the Irish Border, and that the unity of the 27 was, in Mr Coveney’s words “stronger than ever”.

The lack of progress means that British prime minister Theresa May’s hopes of a special Brexit summit in November appear to be slipping away. UK sources had spoken last week of a hope that Dominic Raab, the Brexit secretary, could make a visit to Brussels on Tuesday to unveil a deal and prepare the way for a Brexit summit.

Mr Barnier was reporting to EU Brexit ministers in Brussels on the state of play of discussions – talks continued here last night until 2.45am – but he said a deal remains elusive. He later met Mr Coveney in a bilateral.

Ministers going in to the meeting played down any talk of a deal this week and said that even when agreement is reached there will have to be time for EU capitals to examine it in detail.

Speaking to journalists, Mr Coveney said: “It was very clear from the general affairs council meeting this morning that the support and solidarity for Michel Barnier and his negotiating team is stronger now than it’s ever been.

“Clearly this is a very important week for Brexit negotiations. The two negotiating teams have really intensified their engagement and the support and solidarity for that work is very, very strong.

“So we’ll have to wait and see where that goes. The issues aren’t new. There’s still clearly work to do . . . we need to give them the time and space now to finish that job. And the sooner that can be done the better for everybody.”

Austria’s EU minister Gernot Blümel said: “In these final stages of the negotiations, ministers showed again today that we are determined to keep the unity of the EU27. We have reconfirmed our trust in the negotiator. And we support his efforts to continue working towards a deal.”

France’s Europe minister, Nathalie L’Oiseau, said that in the context of discussion on an all-UK customs arrangement the question of access to UK waters for fishermen was particularly important for France, Denmark, Belgium, Spain and Ireland.

To avoid a hard border on the island of Ireland ever emerging, the British government is proposing a temporary UK-wide customs union to be in place until another solution is believed possible by Whitehall.

The EU is in turn insisting the UK could not unilaterally withdraw from such an agreement if Whitehall decided that another border solution was possible.

Michael Roth, Germany’s minister of state for the EU, said the member states had made “many compromises but the room for manoeuvre is very much limited and our British friends know exactly where our discussions are”.

Belgium’s deputy prime minister, Didier Reynders, told reporters: “We have time but not so much, so for this moment it’s very difficult to make real progress but before Christmas I’m hoping that it will be possible.

“Of course we are prepared for all the different possibilities but we try to work hardly on a good agreement and we are very close, you know what are the limits for the moment.

“About Ireland we have made a proposal with some evolutions in the last days but until now we don’t have a positive signal about that so I’m hoping this will be the case in the next weeks but certainly not today.”

With the UK cabinet yet to back Mrs May’s plan for a customs union, Ales Chmelar, the Czech Republic’s Europe minister, suggested the logjam was at the political level rather than between the negotiators.

He said: “I still hope that we will have a decision soon on decisive progress in the negotiations but it is to be seen whether we hold a summit before December or not.”

Earlier Boris Johnson claimed Mrs May is on the brink of “total surrender” to the EU over Brexit as he urged the cabinet to mutiny against the British prime minister’s withdrawal agenda.

Former foreign secretary Mr Johnson suggested that if Mrs May’s plans for a backstop went through, the UK could be reduced to the status of a colony.

In a stinging attack on the British PM’s proposals ahead of a British cabinet meeting on Tuesday, Mr Johnson said Mrs May’s agenda would see the UK “remain in captivity”. He said plans for a backstop would be worse than remaining in the EU.

Mrs May is under fire from both wings of the Tory party after the shock resignation from the government of Mr Johnson’s pro-European brother Jo, who also delivered a withering attack on the PM’s stance.

That move fired speculation that more ministers who backed Remain in the referendum campaign could also quit.

Writing in the Daily Telegraph, Mr Johnson said that even if the government got the EU to agree to giving London a unilateral exit option from the backstop, it would be meaningless.

“The awful truth is that even if the Cabinet mutinies – as they ought – it will make little difference.

“Even if we agree with the EU that the UK must have a unilateral break clause, so that we can go our own sweet way at a time of our own choosing, it is irrelevant because the programme and ambition of the government is to remain in captivity, to stay in our cell, even if we are given the theoretical key to escape.”– Additional reporting Guardian/PA