Austria condemns Russia over colonel it says spied for Moscow 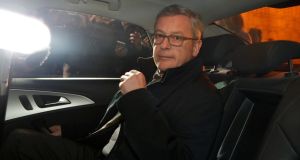 Austrian ambassador to Russia Johannes Eigner leaves the Russian foreign ministry headquarters in Moscow after it was declared that Austria suspects a recently retired military officer in spying for Russia for decades, on Friday. Photograph: Sergei Karpukhin/Reuters

Austria condemned Russia for espionage on Friday after launching an investigation of a retired army colonel suspected of spying for Moscow for many years.

Sebastian Kurz, the Austrian chancellor, demanded an explanation from Moscow, saying that the retired colonel – who has not been named – was suspected of working undercover for the Russian secret services from the 1990s until 2018.

The case – coming one month after the Netherlands revealed it had caught four Russian military intelligence officers red-handed in The Hague – would “not improve relations” between Russia and the EU, Mr Kurz told a press conference in Vienna. “Russian spying in Europe is unacceptable and is to be condemned.”

Russian foreign minister Sergei Lavrov appeared to have been caught off guard by Mr Kurz’s announcement and complained that Moscow had been given no warning about the unfolding spy scandal. Russia’s western partners were increasingly frequently using unprofessional “megaphone” diplomacy, “accusing us in public and demanding an apology over questions we know nothing about”, Mr Lavrov told reporters in Moscow.

The espionage investigation marks a severe test for Russia’s relations with Austria, a country it counts as an abiding ally in Europe even as relations with the EU have frayed over Ukraine and the attempted assassination of Sergei Skripal in the UK this year.

President Vladimir Putin has cultivated ties with the Austrian leaders in the hope that Vienna, which took over the rotating presidency of the EU in July, will persuade European governments to ease sanctions on Russia. Mr Kurz, who leads a coalition government with Austria’s far-right, pro-Russia Freedom Party, refused to follow other EU countries in expelling Russian diplomats over the Skripal poisoning.

Karin Kneissl, Austrian foreign minister, who invited Vladimir Putin as guest of honour to her wedding in August, summoned the Russian charge d’affaires on Friday and called off an official visit to Moscow planned for early December.

Austria’s defence minister Mario Kunasek said a “friendly” intelligence agency had supplied Vienna with information about the retired colonel that had led to the investigation.

Russian political analysts said either the US or a western European government irritated by Austria’s loyalty to the Kremlin might have exposed the retired colonel’s alleged spying activities to undermine the relationship between Moscow and Vienna.

The incident is the latest spy scandal to rock relations between an EU country and Russia. Only last month the Netherlands revealed it had thwarted an attempt by four Russian military intelligence officers to hack into the computers of the Organisation for the Prohibition of Chemical Weapons in The Hague in April.

The Kremlin dismissed the allegations as “fantasies” and claimed the West was gripped by “spy mania”.