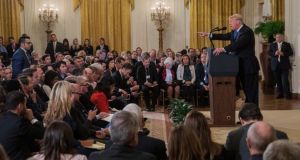 President Donald Trump speaks at a press conference in the East Room of the White House in Washington on November 7th. Photograph: Erik S Lesser/EPA

US president Donald Trump has warned House Democrats he won’t co-operate with them if they launch investigations against him, adding they would risk public “investigation fatigue” and retribution from the Republican-controlled Senate.

“They can play that game, but we can play it better,” Mr Trump said at White House news conference the day after Republicans increased their majority in the Senate in the midterm elections but lost control of the House of Representatives. The president cited “questionable things” done by Democrats, including “leaks of classified information”, and said that if Democrats investigated him, it would result in a “war-like posture”.

Asked how he would respond to an order from House Democrats to provide his tax returns, Mr Trump repeated statements he first made during the presidential campaigns that he wanted to wait until audits are completed.

Mr Trump issued the warnings as he reversed his typically antagonistic tone towards Democrat Nancy Pelosi, who is set to return as House speaker after Democrats won the chamber’s majority in Tuesday’s elections.

“We actually have a great relationship,” Mr Trump said of Ms Pelosi. “I give her a great deal of credit for what she’s done and what she’s accomplished.”

Democrats’ takeover of the House in January will allow them to force administration officials to testify and provide documents. That will subject Mr Trump’s decision-making – as well as his personal finances and potential conflicts of interest – to deeper public and private examination by key committees, as the national focus shifts to the 2020 presidential election.

Mr Trump also engaged in one of his most direct confrontations with a reporter, arguing with CNN’s Jim Acosta at a news conference on Tuesday and calling him rude.

Mr Trump invited Acosta, a frequent foil, to ask him a question at the news conference.

Acosta questioned him about his rhetoric on immigration during the campaign and his deployment of troops to the US border with Mexico purportedly to stop a so-called “caravan” of migrants. Mr Trump’s critics have called the deployment a political stunt.

The back and forth between Mr Trump and Acosta quickly grew heated after the reporter asked why the president had “demonised” immigrants in a widely criticised ad rejected by networks. Mr Trump told Acosta that he should “let me run the country” and Acosta “should run CNN”.

When Acosta tried to ask further questions, Mr Trump became angry, demanding that the reporter sit down and give up the microphone. Acosta refused. Mr Trump backed away from his podium and briefly paced the stage.

“You are a rude, terrible person. You shouldn’t be working for CNN,” Mr Trump said.

The next questioner, NBC reporter Peter Alexander, defended Acosta as a fine reporter.

“Well, I’m not a big fan of yours, either, honestly,” Mr Trump told Alexander. “Just sit down please,” he said to Acosta.

“When you report fake news, which CNN does a lot, you are the enemy of the people,” Mr Trump said.

For the past two years, Republicans have subjected Mr Trump to relatively little oversight, spurning most requests from the minority party. Democrats say that will change almost immediately when the 116th Congress opens on January 3rd. They have a long list of topics they plan to look into, including financial deregulation, Mr Trump’s business interests and Russia’s election interference.

Mr Trump began issuing warnings to Democrats against inquiries into his administration early in the day on Wednesday with a Twitter posting.

“If the Democrats think they are going to waste Taxpayer Money investigating us at the House level, then we will likewise be forced to consider investigating them for all of the leaks of Classified Information, and much else, at the Senate level,” the president wrote.

Democrats say that when it comes to the administration’s response, for example, to the “caravan” of Central American immigrants, they want answers about the rationale behind the troop deployments and details on the force’s rules of engagement.

“It’s not like we’re going to go drunk-crazy with subpoenas. But it may seem that way because we are coming off a two-year drought of no subpoenas,” said Representative Gerald Connolly of Virginia, the top Democrat on the oversight subcommittee on government operations.

Democrats say they want to pursue unanswered questions about Russian interference in the 2016 election and end what they call a campaign by House Republicans to undermine special counsel Robert Mueller’s continuing investigation. – Bloomberg