Macron warns about dangers of nationalism at Armistice ceremony

Some 70 world leaders gather at the Arc de Triomphe in Paris for a solemn ceremony to mark the 100th anniversary of the end of first World War. Video: Reuters 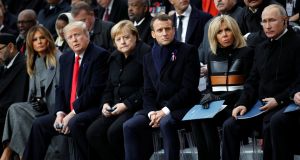 Some 70 world leaders gathered under rainy skies at the Arc de Triomphe in Paris on Sunday for a solemn ceremony to mark the 100th anniversary of the end of first World War.

US president Donald Trump, Russia president Vladimir Putin, German Chancellor Angela Merkel and dozens of monarchs, presidents and prime ministers from Europe, Africa, the Middle East and beyond joined French president Emmanuel Macron to mark the moment guns fell silent across Europe a century ago. The commemoration is the centrepiece of global tributes to honour the 10 million soldiers who were killed during the 1914-18 war and the moment the

Armistice, signed in northeastern France, came into effect at 11am on November 11th, 1918.

French President Emmanuel Macron warn about the fragility of peace and the dangers of nationalism: a theme that seemed directed, at least in part, at Mr Trump, who listened stony-faced. “The traces of this war never went away,” Mr Macron said.

The lesson of the Great War can not be that of resentment between peoples, nor should the past be forgotten,” he said

Mr Macron, sorrow etched on the faces of former French soldiers standing to attention around him during the ceremony. “It is our deeply rooted obligation to think of the future, and to consider what is essential.”

As Mr Trump’s convoy was making its way up the Champs Elysees to the Arc de Triomphe, a bare-breasted protester from the Femen radical feminist group ran towards his motorcade, coming within a few metres, before being apprehended by police.

I’m in Paris this morning for the Armistice Day Commemoration at the Arc de Triomphe. I will stand in memory of the more than 200,000 Irishmen who fought in WW1 and the many Irishwomen who witnessed the horrors of war and worked courageously to save lives. #ArmisticeDay100 #WW1

Photographs of the incident appeared to show that she had the words “fake peacemaker” scrawled across her body. In a glass canopy at the foot of the triumphal arch, built by Emperor Napoleon in 1806, the leaders stood for the solemn ceremony.

The last to arrive was Russia’s Putin, who shook hands with Mr Macron, Dr Merkel and then Mr Trump, briefly giving the US leader a thumbs up. Mr Macron stood to attention as a military band played the Marseillaise, the French national anthem, before walking through the rain to inspect troops. He then took his place under the Arc while cellist Yo-Yo Ma played a movement from a Bach symphony.

In a rare public display of emotion by the leaders of two world powers, Mr Macron and Dr Merkel held hands on Saturday during a poignant ceremony in the Compiegne Forest, north of Paris, where French and German delegations signed the Armistice that ended the war.

Testimonies written by soldiers on November 11th, 1918, as the ceasefire took hold, will be read at Sunday’s event by high school students in French, English and German.

The conflict was one of the bloodiest in history, reshaping Europe’s politics and demographics. Peace, however, was short-lived and two decades later Nazi Germany invaded its neighbours.

On Sunday afternoon, Dr Macron will host the inaugural Paris Peace Forum, which seeks to promote a multilateral approach to security and governance and ultimately avoid the errors that led to the outbreak of World War One.

Dr Merkel said in a statement the forum showed that “today there is a will, and I say this on behalf of Germany with full conviction, to do everything to bring a more peaceful order to the world, even though we know we still have much work to do.”

Mr Trump, who champions a nationalist ‘America first’ policy, will not attend the forum.

The US leader has said he will also not hold a bilateral meeting with Putin in Paris. Trump and Putin are expected to have formal talks later this month when both attend a G-20 summit in Buenos Aires.

Should the two leaders chat briefly during Sunday’s events, their body language will be closely scrutinised.

Special Counsel Robert Mueller is probing alleged Russian interference in the 2016 US election and any possible collusion with Trump’s campaign. –Reuters