Approval for success of Muslim women, and for Democrats taking House of Representatives 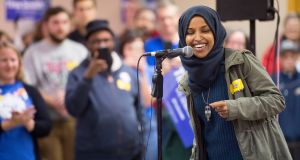 The election of two Muslim women to the US House of Representatives as well as the Democratic Party’s success in taking back control of the chamber have been widely welcomed in the Middle East.

Michigan’s Rashida Tlaib, a woman of Palestinian descent, and Minnesota’s Ilhan Omar, an immigrant born in a Kenyan-Somali refugee camp, won by large margins despite Trump administration policies to limit the entry to the US of Muslim visitors and refugees.

While the women cannot change US policy, their presence could alter negative US attitudes toward Muslims. A recent study by the New America Foundation and the American Muslim Institute reported that two in five US citizens believe Islam is incompatible with national values and that Muslims are not as patriotic as non-Muslims.

Reflecting expectations that the Democrat majority could check President Donald Trump’s excesses, Iran’s domestic news channel Irinn said “the project of impeaching [Trump] is under way. Even if [the Democrats] do not succeed, he will not be able to go on a rampage as he did two years ago.”

The Democrat victory in the House could spur lawmakers from both parties to insist the administration promptly halt US aid and arms supplies to Saudi Arabia and the United Arab Emirates (UAE) and put pressure on them to end their war in Yemen.

The House has long opposed US targeting and logistical support for the Saudi air force and called for suspension of weapons deliveries. Anti-war factions in both US parties have been energised by the killing by a high-level team from Riyadh of Saudi journalist Jamal Khashoggi.

When the new House convenes in January, Democrat Eliot Engel from New York is expected to become chairman of the influential House foreign affairs committee. He has urged the administration not only to push for an end to the Yemen war but also to loosen ties to Saudi Arabia.

Mr Engel has supported Trump’s recognition of Jerusalem as Israel’s capital and efforts to float a peace plan but he backs the two-state solution, involving the emergence of a Palestinian state alongside Israel rather than the formula said to be favoured by the administration.

He is critical of its decision to halt aid to the Palestinian Authority and to UNRWA, the UN agency caring for Palestinian refugees, policies he considers “counterproductive”. These stands will be regarded in the region as positive.

Mr Engel’s committee could press the administration to rethink its withdrawal from the Iran nuclear deal, which he initially opposed but now supports. He says it serves US interests although he has helped pass legislation sanctioning Iran for meddling in regional affairs, developing ballistic missiles and cracking down on dissent.

Anger over alleged Russian interference in Mr Trump’s favour in the 2016 US election could lead House Democrats to adopt a strong line against Russian intervention in Syria and refuse to support negotiations to end the conflict as long as Moscow has a key role in the war and peacemaking.

Democrats are certain to back Trump’s demand for Iran to pull its militiamen out of Syria but could also support his call for less US military involvement in Syria.