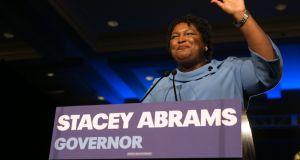 Stacey Abrams, the Demcratic candidae for governor of Georgia: “In a civilised nation, the machinery of democracy should work for everyone, everywhere.” Photograph: Jessica McGowan/Getty Images

The US midterm elections brought significant gains for Democrats, who retook the House of Representatives and snatched several governorships from the grip of Republicans.

But some were left questioning why Democrats suffered a series of setbacks that prevented the party from picking up even more seats and, perhaps most consequentially, left the US Senate in Republican hands.

Among the most eye-catching was a statistic showing Democrats led Republicans by more than 12 million votes in Senate races, and yet still suffered losses on the night and failed to win a majority of seats in the chamber.

The obvious discrepancy between votes cast and seats won renewed some frustration on the left with an electoral system they complained gives an advantage to conservative-leaning states.

But constitutional law experts said more pressing concerns for Democrats could be found in a combination of gerrymandering and voter suppression tactics that might have prevented them from winning an even larger majority in the House and some key statewide elections.

“The rise of minority rule in America is now unmistakable,” said Laurence Tribe, a constitutional law professor at Harvard University.

“Especially with a sitting president who won a majority in the electoral college [in 2016] while receiving roughly three million fewer votes than his opponent, and a supreme court five of whose nine justices were nominated by Republican presidents who collectively received fewer popular votes than their Democratic opponents and were confirmed by Senates similarly skewed.”

According to the latest data, Democrats won the House popular vote by about seven percentage points in Tuesday night’s midterms.

They picked up 29 Republican-held seats in the House, while losing two of their own incumbents, resulting in a net gain of 27 seats. Republicans meanwhile won a larger majority in the Senate, picking up at least two seats as a handful of vulnerable Democrats faced defeat.

The mixed result undermined Democratic hopes of a blue wave in an election billed as a referendum on Donald Trump and his presidency. In the 2010 midterms, by contrast, Republicans stormed into control of the House with a haul of 63 seats.

But the latter was the result of partisan gerrymandering, which saw Republican-controlled state legislatures redraw congressional districts to favour the party in what conservative architects dubbed as Redmap, short for the Redistricting Majority Project.

Referring to the process as “the deliberate rigging of district boundaries”, Tribe said it all but ensured that the incoming House of Representatives would remain more closely divided despite the broader electorate favouring Democrats.

It was for this very reason that Tuesday night’s governors’ contests were deemed by Democrats as equally, if not more, important. With the next redrawing of district lines set to take place in 2020, it was regarded as vital for Democrats to win back seats in state legislatures across the country.

Democrats made gains in some must-win states, including Michigan, but fell short in other battlegrounds, such as Florida and Ohio. David Daley, author of a 2016 book about how Republicans built a firewall against Democrats through redistricting, said he was not sure Democrats had done enough on Tuesday “to ensure that they have a reasonable voice in the process”.

Elsewhere, progressives lamented the results in the Senate, where some commentators were quick to note that Democrats led the overall tally by double-digit percentage points. The most recent figures had Republicans holding 51 seats and Democrats with just 46, with a handful of races still too close to call.

But the 2018 Senate map was unfavourable for Democrats going into the midterms – the party was defending 26 seats compared with Republicans’ nine – and the outcome had more to do with which states were up for grabs.

Each of America’s 50 states elects two senators, regardless of population, and only a third of the country’s Senate seats are voted on each election cycle.

What that means is that California, which has a population of just under 40 million, holds the same representation in the Senate as Wyoming, which at roughly 579,000 is the least populous state in the country.

Golove said the issue of Senate representation simply had not yet become a part of mainstream American discourse.

Because the Senate map changes every two years, experts said, it was also difficult to tabulate what a national vote might look like. Since more Democratic seats were up for re-election in 2018, some argued, it was not unexpected that the party secured more votes.

“The Senate is inherently anti-majoritarian,” said Erwin Chemerinsky, the dean of Berkeley Law at the University of California. “So it is not about the total vote, but votes in each state.”

Any notion of change would require a constitutional amendment, he added, which is unlikely to occur in any foreseeable future.

“That is not going to happen, because it would take approval of two-thirds of both houses of Congress and approval of three-quarters of the states,” Chemerinsky said. “The states that [currently] benefit will never approve this and would block a constitutional amendment’s passage.”

Arguably more tangible than the historic construct of America’s electoral process was the role voter suppression might have played in some big Democratic losses.

In North Dakota, voter ID rules pushed by Republicans and upheld by the supreme court might have barred thousands of Native Americans from voting in Tuesday’s general election. The restrictions required that voters show their current residential address in order to vote. But Native Americans who live on reservations do not have street names and instead use PO boxes.

In 2012, the state’s incumbent Democrat, Senator Heidi Heitkamp, was elected in part due to the support of Native American voters. She lost on Tuesday to her Republican challenger, Kevin Cramer, although the margin was large enough to suggest voter suppression tactics alone cost Heitkamp the race.

The closely watched governor’s race in Georgia, however, told a more contentious story, as the Democrat Stacey Abrams vied to become the first black woman elected governor in US history. Abrams was running against the Republican Brian Kemp, who as Georgia’s sitting secretary of state remained at the helm of the office tasked with overseeing its elections.

Leading up to the election, Kemp’s office put at least 53,000 voter registrations on hold – the majority of which applied to black voters – citing Georgia’s so-called “exact match” law. The restrictions could have prevented thousands of eligible voters from casting ballots due to minor discrepancies with other identification documents that included missing hyphens, middle initials or accent marks in a name.

Abrams, who narrowly trailed Kemp as returns poured in on Tuesday, refused to concede. “We are going to make sure that every vote is counted, every single vote,” she said. “In a civilised nation, the machinery of democracy should work for everyone, everywhere.” – Guardian