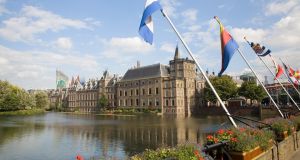 The government building in The Hague. Photograph: iStock

For the first time a majority of the Dutch population supports the idea of euthanasia for those who say they’re “tired of life” although they remain physically healthy, a survey shows.

In 2002 the Netherlands became the first country in the world to legalise euthanasia as a form of painless escape for terminally ill patients – with the emphasis on those experiencing “hopeless and unbearable suffering”.

The procedure remains tightly controlled. Two doctors are required to agree independently in each case that the legal conditions have been met. However, there’s a growing debate about whether or not availability should be broadened to include those who feel their lives are “at an end”.

As a result, controversial new legislation is to be tabled in parliament by the centre-left party D66 early next year that would make euthanasia available to citizens over 75 who believe their lives are “complete” – and who wish to have control over how and when they end.

The new representative survey by the national statistics agency will be good news for D66 because it shows clearly for the first time that public attitudes to euthanasia are changing, and that that change is very much in line with the party’s proposed new guidelines.

They survey shows the same overwhelming support for euthanasia as before, with 87 per cent of the population favouring its availability in certain controlled circumstances, 8 per cent opposed to it in all circumstances and 5 per cent with no opinion.

In religious terms, the greatest support for the procedure – at 98 per cent – comes from those who describe themselves as “non-religious”, with the greatest opposition from Muslims and orthodox Protestants.

However, within those broad parameters there’s been an important shift, with 55 per cent of those surveyed now of the view that euthanasia should be available “in cases where people feel tired of life while being in good physical health”. Thirty-two per cent remain opposed to this.

As regards other specific “hard case” situations, 80 per cent agreed with its provision in cases of advanced dementia where the wish had been made known in advance.

Seventy-five per cent were in favour for terminally ill children and people with severe mental disorders.

The lower age limit for assisted suicide is currently 12, and while a third of respondents said they believed the age should be lowered to include younger children in distress, roughly half said they felt age should play no role in the decision at all.

The survey confirms that although it remains controversial and some cases become high profile, euthanasia is still used infrequently. There were 6,126 deaths by euthanasia in 2018, amounting to 4 per cent of the people who died in the Netherlands last year.