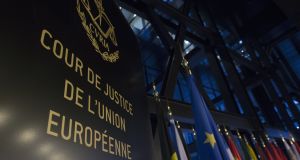 The Luxembourg-based Court of Justice of the European Union on Tuesday ruled that cases concerning the application of EU law must not be dealt with by courts or tribunals that are not independent. Photograph: John Thys/AFP/Getty

Poland’s supreme court has been told by the EU’s court that it is up to the Polish court itself to determine whether its newly constituted disciplinary chamber is sufficiently independent to rule on controversial enforced judicial retirements.

In kicking the ball back to the Polish court, the Court of Justice of the European Union (CJEU) made clear it was just as concerned as the referring court about the issues raised over judicial independence, but that initially the issue should be dealt with domestically.

The Luxembourg-based CJEU on Tuesday ruled that cases concerning the application of EU law must not be dealt with by courts or tribunals that are not independent. But it was up to the Polish supreme court, faced with a challenge from such courts, themselves to determine their impartiality or refer cases on to other courts .

The judgement is a response to three combined cases, the latest in a succession of CJEU verdicts on the Law and Justice (PiS) government’s efforts to make what it argues are much-needed changes to Poland’s judiciary.

The decision follows a referral from the supreme court itself, which asked the CJEU for its view on the independence of Poland’s new disciplinary chamber.

The disciplinary chamber’s judges had been elected by the newly constituted National Council of the Judiciary (KRS), which is now mostly composed of members appointed by the parliament in 2018 as a result of another of the government’s controversial judicial reforms.

In June, the advocate general of the CJEU, Evgeni Tanchev, issued a non-binding opinion that the disciplinary chamber “does not satisfy the requirements of judicial independence under EU law”, and that the new KRS is potentially “compromised” by influence from legislative authorities.

The CJEU stated on Tuesday that the requirement that courts be independent forms part of the essence of the right to effective judicial protection and the fundamental right to a fair trial.

These rights are of cardinal importance as a guarantee that all the rights that individuals derive from EU law will be protected and that the values common to the member states set out in Article 2 of the Treaty on European Union, in particular the value of the rule of law, will be safeguarded.

The court set out a series of tests which a referring court should apply in determining the independence of a disciplinary court or tribunal.