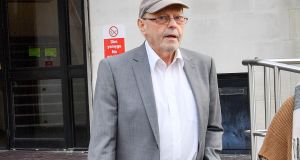 Geoffrey Bran outside Swansea Crown Court where he was cleared of killing his wife after he was accused of burning her with scalding oil following a row in their chip shop. Photograph: Ben Birchall/PA Wire

A chip shop owner has been cleared of murdering his wife with scalding oil after telling a jury she accidentally tipped it over herself.

Geoffrey Bran ( 71) was accused of attacking his wife, Mavis Bran (69)at the Chipoteria in the village of Hermon, Carmarthenshire, south-west Wales. Mavis Bran died six days after the incident in which she suffered burns to 46 per cent of her body.

Mr Bran denied hurling the oil over his wife, claiming she had accidentally tipped the fryer over herself.

Giving evidence at the trial at Swansea crown court, Mr Bran said: “I turned around and saw her flying to the floor. I could see the fat fryer moving forward on the table. Instantly the legs fell off the edge and the weight of the oil tipped the whole thing forwards. The oil must have moved things fast and it was like a waterfall and landed on her chest.”

He said he moved his wife and sat her up to take off her oil soaked clothes. He added: “I didn’t know if I was doing the right thing to be honest. I just grabbed the bottom of her jumper and pulled it over her head.”

He told her to run to their house and ask their lodger to call an ambulance. He agreed in court it was “callous to the point of inhumanity” not to check on his wife as he carried on serving, telling customers there had been a “little accident”.

The jury heard Mavis Bran had started drinking red wine in the morning and was over the drink-drive limit at the time of the incident just before 1pm.

She told a friend and a paramedic that her husband was to blame before she died. The paramedic, Allison Williams, told the jury: “I asked her if she could explain what had actually happened that day. She said: ‘My husband threw hot fat over me.’ She just stated they’d had an argument.”

Mavis Bran died at Morriston hospital, Swansea, from complications arising from her burns. Mr Bran admitted that the couple often argued and had fallen out that day over the cleanliness of the fryers and burnt fish. – Guardian News and Media