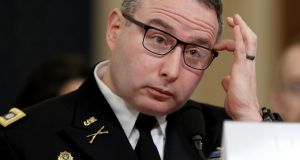 Two US officials who listened in to the July 25th phone call between president Donald Trump and Ukrainian president Volodymyr Zelenskiy have told the impeachment inquiry into Mr Trump that they felt that the call was unusual, undermining Mr Trump’s claim that it was a “perfect call”.

Speaking on the third day of public testimony in the ongoing impeachment inquiry, Lt Col Alexander Vindman, a member of the White House National Security Council, described his concern at the phone call. The phone call is at the centre of the impeachment investigation opened in September.

Democrats are seeking to prove that Mr Trump improperly asked a foreign government to undertake politically motivated investigations into his political rival Joe Biden, whose son served on the board of a Ukrainian gas company while he was vice-president and who is running for the Democratic nomination in next year’s presidential election.

“What I heard was inappropriate, and I reported my concerns to Mr Eisenberg,” Lt Col Vindman said, referring to John Eisenberg, the top lawyer at the National Security Council. “It is improper for the president of the United States to demand a foreign government investigate a US citizen and political opponent,” he said, referring to Mr Trump’s request for Mr Zelenskiy to investigate Joe Biden.

Lt Col Vindman, the top official on Ukraine in the White House, who was born in Ukraine but emigrated to the US as a toddler, also described his concern at how Rudy Giuliani, Mr Trump’s personal lawyer, was promoting “false information that undermined the United States’ Ukraine policy”.

The decorated lieutenant colonel testified that Gordon Sondland, the US ambassador to the EU, told Ukrainian representatives at a meeting on July 10th that they should undertake specific investigations in order to secure a meeting with Mr Trump. Afterward, Mr Sondland pushed for Ukraine to deliver investigations into the 2016 elections and into Mr Biden and his son Hunter, according to Lt Col Vindman. “I stated to Ambassador Sondland that this was inappropriate and had nothing to do with national security,” he said.

In his opening statement, Lt Col Vindman – who has been accused by some Republicans of disloyalty, despite his service in the US military – spoke of his pride in his military career, “serving the nation that gave my family refuge from authoritarian oppression”.

He also addressed his late father directly. “Dad, my sitting here today, in the US Capitol talking to our elected officials, is proof that you made the right decision 40 years ago to leave the Soviet Union and come here to the United States of America in search of a better life for our family. Do not worry, I will be fine for telling the truth.”

Jennifer Williams, a foreign service official who is currently seconded to the office of vice-president Mike Pence, also described at Tuesday’s hearing before the House intelligence committee how the phone call struck her as unusual.

Ms Williams, who has listened in on approximately 12 phone calls between US presidents and heads of states during her career, said the call “struck me as political in nature given that the former vice-president is a political opponent of the president”. “The reference to Biden sounded political,” she said.

Ms Williams also testified that she was informed in May by an assistant to acting White House chief of staff Mick Mulvaney that Mr Trump had decided that Mr Pence would not attend Mr Zelenskiy’s inauguration in Ukraine as planned, though she said she was not given a reason why.

Republicans on the House intelligence committee, which is leading the impeachment investigation, pressed both witnesses on whether they had contact with the media about the matters at hand. Both said they did not.

In one of the most tense moments of the hearing, the top Republican on the intelligence committee, Devin Nunes, asked Lt Col Vindman if he knew the identity of the whistleblower who originally launched a complaint about the phone call.

Lt Col Vindman said that he had spoken to two individuals about the call – George Kent, the state department official who testified last week, and a second individual who he did not name. “I’ve been advised not to provide any specifics on who I spoke to inside the intelligence community,” Lt Col Vindman said. “What I can offer is that these were properly cleared individuals or was a properly cleared individual with a need to know.” Committee chairman Adam Schiff warned his Republican counterpart that “these proceedings will not be used to out the whistleblower”.

Under questioning by the Republicans’ lawyer, Lt Col Vindman also confirmed that he was offered the job of Ukrainian defence minister three times by Ukraine’s director of the national security council. “Every single time, I dismissed it,” he said, adding that “I’m an American. I came here when I was a toddler. I immediately dismissed these offers, did not entertain them.”

Later on Tuesday the committee heard testimony from Kurt Volker, the former US special envoy to Ukraine, and Tim Morrison, a former National Security Council aide. Mr Morrison resigned from the position a day before he gave a closed-door deposition to the impeachment inquiry,

Mr Morrison testified on Tuesday that he resigned from the National Security Council of his own volition and felt no pressure to resign, and he did not fear retaliation for his testimony.

“In retrospect, I should have seen that connection different, and had I done so, I would have raised my own objections,” he said in prepared testimony.

He said Mr Trump was critical of Ukraine. “He said that Ukraine was a corrupt country, full of terrible people. He said they ‘tried to take me down’,” Mr Volker said.

Mr Volker’s testimony conflicted in some aspects with an earlier account he gave. In closed-door testimony in October, Mr Volker said he had not heard any references to investigations during the July 10th White House meeting between US and Ukrainian officials. Additional reporting: – Reuters