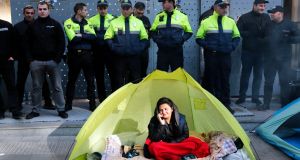 A woman attends a protest rally in front of the parliament building in Tbilisi, Georgia on Monday. Photograph: Zurab Kurtsikidze/EPA

Georgian protesters gathered again in central Tbilisi on Tuesday evening, a day after police used water cannon to disperse them and arrested 37 people for blockading parliament to demand the government’s resignation and snap elections.

The protests began last Thursday when deputies from the ruling Georgian Dream party opposed the introduction of a fully proportional electoral system to replace current voting rules that critics say give an unfair advantage to the party in power.

The European Union and United States also expressed disappointment that Georgian Dream appeared to backtrack on promises of electoral reform, but the government insists the matter is now closed until after next year’s planned parliamentary elections.

Some 20,000 people rallied outside parliament on Sunday and then clashes erupted on Monday when groups of protesters blocked entrances to the assembly, prompting police to target them with water cannon.

Some reports said tear gas was also fired, and police said 37 people were arrested and six injured in the melee.

“When some irresponsible politicians called upon citizens to first block the streets and put up barricades, and later to block access to the parliament building . . . it meant that a key public institution – parliament – would fail to operate for half a day,” Georgian prime minister Giorgi Gakharia said on Tuesday.

“In such conditions police and government took a decision, which they were entitled to do . . . Let me clearly say that the state and police will act absolutely within the law and do the same in future when irresponsible politicians act in the same manner,” Georgian media quoted him as saying.

Opposition leaders vow to continue protests until elections are brought forward and the government steps down and is replaced by a temporary administration. They say this interim cabinet must not include Bidzina Ivanishvili, the leader of Georgian Dream and the nation’s richest oligarch.

Critics accuse Mr Ivanishvili of being soft on Moscow – where he made his fortune – despite Russia turning Georgia’s Abkhazia and South Ossetia regions into de facto protectorates and basing troops in the two areas after winning a short 2008 war against Tbilisi’s forces.

Georgia remains a strong western ally in the strategic Black Sea region, but the EU and US said in a joint statement on Sunday that they “recognise the deep disappointment of a wide segment of Georgian society at the failure of parliament” to back electoral reform.

“The unexpected halting of this process last Thursday has increased mistrust and heightened tensions between the ruling party and other political parties and civil society,” the EU and US missions to Tbilisi stated.

They called for “calm and respectful dialogue between the government and all political parties and civil society” to resolve the crisis, and said they “fully support the right to peaceful assembly and freedom of expression”.

US to send highest level official to Taiwan in four decades 14:36
Sri Lankan elections offer Rajapaksas chance to cement power 13:47
Beirut explosion: At least 100 killed as rescuers search for survivors 13:37
Meghan Markle wins court bid to keep her friends’ identities secret 11:43
‘This was like a nuclear bomb’: More than 2,700 injured in Beirut explosion 08:30