But NGO says there is no evidence controversial trial was unjust 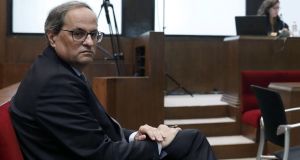 Catalan regional president Quim Torra at the courthouse in Barcelona, on Monday, ahead of his trial over refusing to remove separatist symbols from public buildings during the parliamentary election campaign. Photograph: Andreu Dalmau/AFP via Getty Images

Amnesty International has called on Spain’s judiciary to release two of the Catalan independence leaders given jail sentences last month, after deeming their punishment disproportionate.

The non-profit organisation made its announcement amid a flurry of trials and court rulings that have added uncertainty to Spain’s already unstable politics.

In October, the supreme court gave jail terms of between nine and 13 years for sedition to nine Catalan leaders who were involved in a 2017 attempt to break away from Spain. The verdict has triggered a wave of unrest by pro-independence Catalans.

In a report on the court case, which it released on Tuesday, Amnesty International said the “interpretation that the supreme court made of the crime of sedition was overly broad and translated into the criminalisation of some acts of legitimate protest”.

The organisation called specifically for the release of Jordi Sànchez and Jordi Cuixart, both rank-and-file independence leaders, who each received nine-year sentences. The case against the two men rested heavily on demonstrations they led in Barcelona shortly before an independence referendum was held in defiance of court orders. Amnesty International said their sentences should be annulled.

The NGO had previously called for their release prior to the verdict, arguing that the two men should not have been held in preventive custody.

The independence movement and the Catalan government have insisted that the trial itself was politically influenced and lacked credibility, charges the Spanish authorities have roundly rejected. Despite its criticisms, Amnesty International said it “did not find any factor suggesting that the trial overall was unjust”.

The report was published the day after Catalan president Quim Torra went on trial for disobedience. During an election campaign earlier this year, Mr Torra refused to remove from the regional government building symbols expressing support for several of the leaders who were at the time in jail awaiting trial. Prosecutors deemed the symbols political propaganda.

In court in Barcelona on Monday, Mr Torra said he was facing a “political trial” and that the electoral board had itself broken the law in ordering him to remove the symbols.

Prosecutors are calling for Mr Torra to be barred from office for 20 months. The verdict is expected in several weeks and if he is found guilty, it is likely that a Catalan election will be called.

Meanwhile, a Seville court has convicted several former senior Socialist politicians for corruption. Among them, the former presidents of Andalucía, José Antonio Griñán and Manuel Chaves, were jailed for six years and barred from public office for nine years, respectively, for their part in a scheme that saw millions of euro of public funds embezzled. The verdict is unwelcome for Socialist leader Pedro Sánchez, who is attempting to form a new government following a general election.