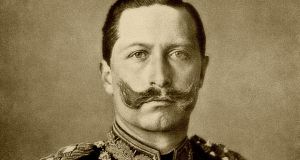 Kaiser Wilhelm II: From exile in the Netherlands in 1927 said, “The press, the Jews and mosquitoes are a plague from which humanity has to free itself, one way or the other.”

A century after the end of Kaiser Wilhelm and imperial Germany, protest is building over a compensation claim filed by his family.

Satirical German television show Neo Royale has launched a campaign against a claim it says is not just immoral – given Kaiser Wilhelm’s key role in the first World War – but is probably without legal basis.

The claim by Georg Friedrich Prince of Prussia, head of the house of Hohenzollern, is for permanent right of residence in Cecilienhof palace near Berlin, or another property. Among other demands: the former family library, 266 paintings – and an imperial crown and sceptre currently on display in Berlin’s Charlottenburg Palace.

Starting point for the legal battle is a 1926 agreement signed between the Hohenzollerns and authorities in Berlin. This allowed the state retain 75 former royal properties while handing back the Hohenzollern family another 39, including Monbijou Palace in central Berlin. In the inter-war years, Monbijou became a state-finance museum containing family-owned exhibits – until it was demolished by East Germany in 1959 and the contents nationalised.

The basis for the claim is a 1994 law allowing compensation of aristocratic families stripped of assets in the post-1945 era – with one caveat.

“Compensation is not to be paid when the application or their ancestors abetted the Nazi regime,” said Prof Eckardt Conze, historian at the University of Marburg.

Neo Royale presented viewers with unflattering evidence against the former imperial family. In 1927 ex-Kaiser Wilhelm, by then living in exile in the Netherlands, said: “The press, the Jews and mosquitoes are a plague from which humanity has to free itself, one way or the other. I believe the best would be gas.”

Seven years later his son, Crown Prince Wilhelm, posed for a Danish newspaper in Cecilienhof, wearing a Nazi armband and brownshirt. Before the second World War, he was a fervent supporter of Hitler, writing to him in 1936: “Please be assured that I stand in line with all German comrades, I am prepared to do everything to bring to success your promises of peace, freedom and equality. Siegheil!”

Given the Hohenzollern-Hitler question is one of the most contested in modern German history, four historian reports were commissioned.

Christopher Clark, regius professor of history at the University of Cambridge and author of The Sleepwalkers, dismissed the idea of the Hohenzollerns aiding the rise of the Nazis. The crown prince, he said was “too inept” to have been an influence on fast-moving events at the time.

Another historian insisted the crown prince was more resistance fighter than fascist cheerleader. The two other historians agreed that he had been a key figure in preparing the way for the Nazi takeover.

After presenting the family’s historical burden – and publishing online the four secret contradictory historical reports at hohenzollern.lol – Neo Royale attacked Germany for even negotiating with the former imperial family.

It noted Berlin’s very different approach towards the 1904-1908 Herero and Nama massacre in today’s Namibia. Once the imperial colony of “German South-West Africa”, up to 100,000 people there were driven into the desert to die. Survivors died of starvation, dehydration and disease in concentration camps.

In 2004 Berlin apologised for what is considered the 20th-century’s first case of genocide, but has refused to pay compensation.

“Eighty per cent of my people had to die [on orders of] your great, great grandfather,” said Herero activist Israel Kaunatjike on Neo Royale.

“We are also demanding compensation. Germany doesn’t want to negotiate with us – but with you.”

Addressing Georg Friedrich Prince of Prussia directly, Mr Kaunatjike added: “If you want justice you must fight first for the Hereros.”