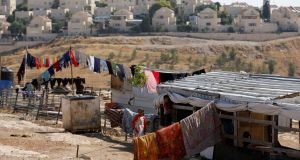 Palestinian children play outside their dwelling in al-Eizariya town with the Jewish settlement of Maale Adumim in the background, in the Israeli-occupied West Bank. Photograph: Raneen Sawafta/Reuters

Palestinians have condemned the US announcement that Israeli settlements in the occupied West Bank and East Jerusalem are not illegal. Secretary of state Mike Pompeo declared on Monday that “The establishment of Israeli civilian settlements is not, per se, inconsistent with international law.”

The US had previously regarded 200 Israeli settlements inhabited by 600,000 Israelis in Palestinian territory occupied in 1967 as obstacles to peace and “inconsistent with international law”.

Nabil Abu Rudeineh, spokesman for Palestinian president Mahmoud Abbas, said: “The United States is neither qualified nor is authorised to negate international legitimacy resolutions and it has no right to give any legitimacy to Israeli settlement.”

Jordanian foreign minister Ayman Safadi reiterated Amman’s condemnation of Israeli settlements as a “unilateral measure that kills the two-state solution [involving the emergence a Palestinian state alongside Israel] and undermines the prospects of regional peace”.

He recalled UN Security Council resolution 2334 of December 2016, which reiterated the “inadmissibility of the acquisition of territory by force” and reaffirmed the UN position that Israel’s settlements violate the Fourth Geneva Convention, which prohibits an occupying power from transferring its citizens into occupied territory. During 2016, UN bodies adopted 18 resolutions critical of Israel’s policies toward the Palestinians.

Egyptian foreign ministry spokesman Ahmed Hafez said that Egypt regards Israeli “settlements in the occupied West Bank as illegal and inconsistent with international law.” Syria condemned the US move as “null and [having] no legal impact”.

The Arab League has repeatedly condemned accelerating Israeli settlement construction and warned against Israeli annexation of all or parts of the West Bank, 60 per cent of which is controlled by Israel. Israel effectively annexed East Jerusalem in 1967 by extending Israeli law, establishing an administration, and building strategic settlements in the city.

Yousef Munayyer, executive director of the US Campaign for Palestinian Rights, called the decision “a green light to Israeli leaders to put settlement building further into overdrive and advance formal annexation” of the West Bank.

The US policy shift was castigated by human rights organisations, including Human Rights Watch and Amnesty International.

Since December 2018, President Donald Trump has adopted three other measures condemned by the Palestinians and Arabs. He recognised all of Jerusalem as Israel’s capital and moved the US embassy there from Tel Aviv. He cancelled $365 million in funding to the UN agency providing for Palestinian refugees living in the occupied territories, Jordan, Lebanon, and Syria. He also recognised the occupied Syrian Golan Heights as Israeli territory.

London-based Middle East Eye reports that since Trump was elected in 2016, plans and tenders for Israeli housing in the West Bank have increased from 4,476 to 13,987.

The 1993 Oslo peace plan stipulates that the fate of East Jerusalem, Palestinian refugees and Israeli settlements is to be negotiated. The US change of policy is likely to finish off the moribund peace process and torpedo before its release Trump’s “deal of the century”, which was meant to resolve the Palestinian/Arab-Israeli dispute.