National day celebrations, known as Diada, bring hundreds of thousands on to streets 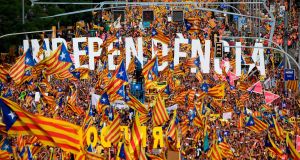 Hundreds of thousands of Catalans took to the streets of Barcelona on Tuesday to commemorate their annual national day, as they demanded the release of imprisoned independence leaders and the right to stage a formal referendum on separation from Spain.

The Catalan national day, or Diada, is held every September 11th to mark the fall of Barcelona during the War of the Spanish Succession in 1714. Traditionally a day of celebration of Catalan culture, over the past half decade it has become increasingly dominated by the independence cause.

Secessionist rank-and-file organisations titled this year’s Diada “Let’s make the Catalan republic”. The festivities were focused on the Diagonal road, which stretches from one end of Barcelona to the other, where participants gathered for a moment’s silence followed by a staggered wave of cheers at exactly 5.14pm – in a reference to the year 1714.

Nine independence politicians and grass-roots leaders have been imprisoned over the past year for their alleged involvement in October’s outlawed Catalan referendum on separation from Spain and the preparations ahead of it. As they remain in jail before their trial, they have become a focus of separatist outrage, along with several other politicians who fled the country.

“This year’s special, because we’ve got people in exile and people in prison,” said Sonia Gómez, who clutched the red-and-yellow-striped Catalan independence flag as she sat in her wheelchair in central Barcelona.

“I think we’ve got one foot in an independent Catalonia and the other’s nearly there. We need to mobilise more and pressurise the politicians to make it happen.”

There had been signs of rising tensions between the pro-independence government of Catalonia and the Spanish government ahead of this year’s festivities. Last week, Catalan president Quim Torra had warned Madrid that the only solution to the territorial crisis was a negotiated referendum on independence, something prime minister Pedro Sánchez has ruled out.

On the eve of the Diada, Mr Torra called on Catalans to resist what he called the “injustices, threats, fear and violence” of the Spanish state.

The local police estimated that about one million people took part in the Barcelona demonstration, while unionist group Catalan Civil Society said the figure was more like 200,000.

No unionist parties took part in the main festivities.

“It’s Catalonia’s day but more than half of Catalans can’t celebrate it,” said Inés Arrimadas, leader in the region of the constitutionalist Ciudadanos party, which staged its own separate event in Barcelona.

However, despite the tensions, foreign minister Josep Borrell, who is seen as a stern critic of the independence movement, caused surprise by telling the BBC that he “would prefer” the jailed Catalan politicians be freed ahead of their trial.

Coronavirus in South Africa: President Ramaphosa warns outbreak will get worse 16:36
Travellers arriving in Spain will not have to quarantine from July 16:15
China calls some Hong Kong pro-democracy protests ‘terrorism’ 13:51
Dominic Cummings to make statement amid claims he breached Covid-19 lockdown rules 13:29
Iranian petrol tanker arrives in Venezuela in defiance of US 13:00