More than 100 migrants died in boat wreck off Libya coast 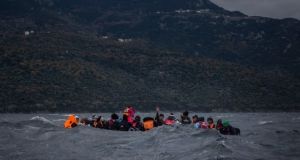 A survivor told MSF that ‘European rescuers’ had come by aircraft and thrown life rafts, but migrants remained in the water for hours. File photograph: Santi Palacios/AP

More than 100 migrants died in early September when their crowded rubber boats were wrecked off the coast of Libya, the MSF aid agency on Monday quoted survivors as saying.

The two vessels had set out from the Libyan coast early on September 1st, each carrying scores of people, mostly African, Medecins Sans Frontieres (MSF) said in a statement on its website.

One boat’s engine failed later that day and the other began to deflate, it quoted a survivor as saying. Some survived by clinging to floating wreckage.

A survivor told MSF that “European rescuers” had come by aircraft and thrown life rafts, but migrants remained in the water for hours.

“On our boat, only 55 people survived. Many people died, including families and children. They could have been saved if rescuers had come earlier,” MSF quoted the unidentified survivor as saying.

Sudanese, Malians, Nigerians, Cameroonians, Ghanaians, Libyans, Algerians and Egyptians were among those on board the wrecked vessels.

Many survivors were brought to the Libyan port of Khoms on September 2nd by the Libyan coastguard, MSF said.

The agency said they faced further ordeals in Libya.

“Many of the survivors are mourning the loss of their relatives,” it said. “Instead of receiving the support they need, refugees and migrants are arrested and detained in deplorable living conditions, without basic safeguards or legal recourse.”

It added: “MSF reiterates its call to end the arbitrary detention of thousands of refugees and migrants across Libya.”–Reuters