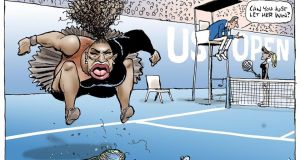 An Australian newspaper defended its cartoonist on Tuesday after publishing a caricature of Serena Williams having a temper tantrum at the US Open tennis tournament, which civil rights leaders, celebrities and fans condemned as racist.

Cartoonist Mark Knight’s image, published in Melbourne’s Herald Sun, showed an angry Williams with exaggerated lips and tongue and a wild plume of curly hair rising from the top of her head as she stomped on her tennis racket.

“This despicable cartoon tried and failed to diminish the greatness & grace of @serenawilliams. Racism in any form is unacceptable,” civil rights activist Rev Jesse Jackson tweeted on Monday.

The cartoon was intended as a lampoon of the tennis star’s angry exchanges with chair umpire Carlos Ramos at the US Open women’s singles final in New York on Saturday.

Williams clashed with Ramos over penalties she thought she did not deserve and ultimately lost to Naomi Osaka, a 20-year-old player born in Japan.

Knight’s portrayal of Osaka as blond and light-skinned also drew criticism for being racist.

The Herald Sun reported on Tuesday that Knight had been mentioned on Twitter nearly 74,000 times following the cartoon’s publication.

The Herald Sun, owned by a News Corp subsidiary, published a defence of its cartoonist on the home page of its website, quoting Knight as saying: “The cartoon about Serena is about her poor behaviour on the day, not about race.”

Williams was fined $17,000 for three code violations during the controversial match, including breaking a racket and verbally abusing the umpire. She did not stomp on her racket during the match as the cartoon portrayed.

Williams said following the US Open incident that male players were held to a lower standard for court conduct.

Well done on reducing one of the greatest sportswomen alive to racist and sexist tropes and turning a second great sportswoman into a faceless prop. https://t.co/YOxVMuTXEC

This despicable cartoon tried and failed to diminish the greatness & grace of @serenawilliams. Racism in any form is unacceptable. Push On @serenawilliams! #KeepHopeAlive! https://t.co/iNLQNZ4ek7

Criticism of Mark Knight's Serena Williams cartoon shows the world has gone too PC & misunderstands the role of news media cartoons and satire. Poor behaviour in any sport needs to be called out. #media #cartoons #markknight @Knightcartoons @theheraldsun https://t.co/KQFuvIJp0Q pic.twitter.com/sRo3AQ1cJW

“I’m here fighting for women’s rights and women’s equality,” Williams said at a news conference after the match.

After the match, Twitter users and tennis commentators alike said the penalties given to Williams were excessively harsh, and some said they may have reflected sexism and racism in tennis officiating.

The National Association of Black Journalists said the cartoon was “repugnant on many levels”.

“The September 10th cartoon not only exudes racist, sexist caricatures of both women, but Williams’s depiction is unnecessarily sambo-like,” the association said in a statement.

“Sambo”, a derogatory term for a black person, is the name of a folkloric figure usually depicted with an exaggerated mouth and an ape-like stance.

News Corp has come under global condemnation for publishing the cartoon, which has also been compared to the racist illustrations ubiquitous during the US Jim Crow era.

Speaking on ABC, Mr Knight said he had “no knowledge of those cartoons or that period” and he thought people were “making stuff up”.

“I’m upset that people are offended, but I’m not going to take the cartoon down,” he said.

“I can’t undraw the cartoon. I think people have just misinterpreted. Maybe there’s a different understanding of cartooning in Australia to America? It was a cartoon based on her tantrum on the day and that’s all it was.”

Bernice King, the chief executive of the King Centre and daughter of Martin Luther King jnr, said the Herald Sun’s stance was “unfortunate”.

It was “without consideration for the painful historical context of such imagery and how it can support biases and racism today”, she said. “Why wouldn’t a human being care about that?”

“Knight’s cartoon conjures up a range of such caricatures that were branded on memorabilia and popularised on stage and screen of the era, including the minstrel-show character Topsy born out of Uncle Tom’s Cabin, as well as the title character in 1899’s Little Black Sambo,” the article said.

In the article published by the Herald Sun, Mr Knight said he was “amazed” at the reaction.

“The world has gone crazy,” he said. Mr Knight said reaction on social media was “unfair”.

Mr Knight had publicly replied to one person on Twitter – US sportswriter Julie DiCaro – seeking an apology for her suggestion the cartoon was sexist.

“A champion tennis player had a mega tantrum on the world stage, and Mark’s cartoon depicted that,” Mr Johnston said. “It had nothing to do with gender or race.”

The Herald Sun article ended with a series of other recent Knight cartoons, but did not include one from last month about Sudanese-Australian violence in Melbourne, which also sparked accusations of racism.–Guardian