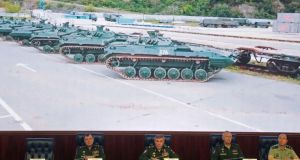 Russian military personnel deliver a briefing on the military exercises at the defense ministry in Moscow on September 6th Photograph: EPA/Sergei Chirikov

Russia launched its biggest military exercises since the cold war on Tuesday, testing the battle readiness of its armed forces at a time of rising tensions with the West.

China is participating in the latest round of the Vostok-2018 or East-2018 war games for the first time in a move that has stoked US concerns that Moscow and Beijing may be planning a military alliance.

Russia’s defence ministry says the military drills taking place between September 11th and September 17th in a vast stretch of territory in eastern Siberia are purely defensive in nature.

But the sheer scale of the exercises involving more than 300,000 servicemen, 36,000 tanks and armoured personnel carriers as well as the Russian air force and navy amount to a massive show of force.

President Vladimir Putin has made military modernisation a priority and the week-long Vostok-2018 is providing an opportunity to flag advances in Russia’s defence capability.

Russia’s Zvezda TV provided live coverage of the start of the exercises on Tuesday as tanks conducted drills at the Tsugol military training ground in East Siberia’s Buryatia region near Russia’s border with China and Mongolia. Almost 4,000km to the north Russia’s Northern Fleet landed a convoy of armoured vehicles on a remote stretch of coastline on the Arctic Chukchi Sea.

As the military drills got under way, Mr Putin met his Chinese counterpart Xi Jinping on the sidelines of an international economic conference in Russia’s eastern port of Vladivostok for talks about the development of relations between the two countries. Mr Putin told reporters that Russia had a “trusting relationship” with China “in politics, security and defence”. Mr Xi said the two countries would work together to push relations “to a new height”.

Later in the day Mr Putin and Mr Xi joked before TV cameras as they tossed pancakes together before eating the traditional Russian dish with caviar.

The friendly tone of the meeting was in sharp contrast with the cold war era when the Soviet Union and China vied for influence in the communist world and clashed over their common border.

Economic interests have helped build strong ties between the two countries since the USSR’s collapse, with Russia emerging as China’s biggest oil supplier as well as a source of natural gas. Global politics have also come into play with Mr Putin and Mr Xi sharing an aversion to US dominance of the world order.

China has sent about 30,000 servicemen to participate in the Vostok-2018 exercises as well as military aircraft including six Mi-171 helicopters earlier purchased from Russia.

Russia’s defence minister said on Tuesday that servicemen from its eastern military district would team up with the Chinese People’s Liberation Army against forces of the central military district in a simulated battle in the Tsugol training ground later this week.

Mr Putin is expected to visit the war games in the coming days. A Kremlin spokesman said the Russian leader would not be accompanied by foreign leaders on the trip to Vostok-2018.