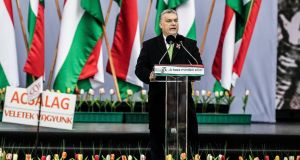 Hungarian leader Viktor Orban has urged his compatriots to use April’s elections to reject immigrants and a hostile foreign liberal elite, as tens of thousands of his supporters and opponents marched through Budapest.

Mr Orban addressed flag-waving followers outside parliament by the Danube as Hungary commemorated its 1848 revolution against Habsburg rule, but his fiery speech and the rival rallies on this national holiday laid bare the country’s divisions.

Hungary is at odds with the European Union over its government’s refusal to accept refugees and laws that tighten control over its NGOs and Budapest’s Central European University, which is funded by liberal philanthropist George Soros.

In claims pushed relentlessly by most media in Hungary, Mr Orban says the EU and United Nations want to implement Mr Soros’s supposed plan to flood Europe with mostly Muslim migrants from the Middle East and weaken nation states.

“We don’t just want to win an election, but our own future,” Mr Orban declared.

“They want to take away our country . . . and give it in a few decades to others, strangers from other continents who do not speak our language and do not respect our culture or lifestyle,” state news agency MTI quoted Mr Orban as saying.

Before Mr Orban’s speech, his supporters marched through Budapest carrying banners bearing slogans such as “Hungary protects Europe”,  “The homeland before everything” and “We are with you Viktor”.

Among the crowd were thousands of Polish supporters of their country’s nationalist leaders, who have allied with Mr Orban. Together they vow to defend “traditional” European values and shield each other from any punitive action by the EU, which accuses them of undermining democracy and the rule of law.

“He protects our country, our freedom, our future, our family, our religion,” said one Orban supporter, Ildiko Buranits, as she walked towards parliament in chilly rain.

“He defends our security and also Europe’s security – as Hungary has done before in its history,” she added.

Erik Igli, an ethnic Hungarian from the Transylvania region of neighbouring Romania, said he would vote for Mr Orban on April 8th.

“I’m here mostly because it’s a national holiday, but also to hear him speak,” he said.

“For me he is the best [candidate], the best for Transylvania.”

Mr Orban launched a scheme in 2010 to offer passports – and voting rights – to the diaspora in neighbouring states. There are some 600,000 ethnic Hungarians in Romania and smaller communities in Ukraine, Serbia, Slovakia and Croatia.

Thousands of Mr Orban’s critics – who call him the “Viktator” and accuse him of turning their country into “Orbanistan” – also marched through Budapest, with many carrying witty placards and wearing costumes.

Their slogans denounced alleged corruption among Mr Orban’s close allies and relatives, accused him of selling out Hungary to Russia through shady deals, and mocked his apparent fixation with immigrants and Mr Soros.

“The [government’s] great respect for Russia and disrespect for the EU is very worrying. As is the corruption,” said publisher Andras Hunyadi at the march.

“This is a protest that people who support all opposition parties can join. We are laughing because there is a lot of fear in Hungary now, and that’s the best way to counteract it.”