US president Donald Trump and Taoiseach Leo Varadkar held a 40-minute bilateral meeting at the White House on Thursday at which the issue of the undocumented Irish in the US was discussed. Video: The White House 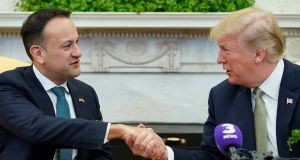 US President Donald Trump shakes hands with Taoiseach Leo Varadkar at a meeting in the Oval Office of the White House on Thursday in Washington, DC. Photograph: Mandel Ngan/AFP/Getty Images 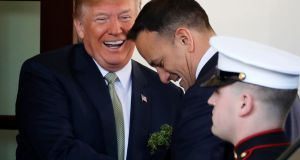 “I will, I love it,” he said, when asked would he visit Ireland, saying he had property there.

“I look forward to being there. It's a great country.” He said the visit could happen next year and whenever it took place “I'd go to the Border”, he said.

Speaking in The Oval Office alongside Taoiseach Leo Varadkar, Mr Trump noted that there were a “tremendous number” of Irish people living in New York where he grew up.

Mr Trump and Mr Varadkar held a 40-minute bilateral meeting at which the issue of the undocumented Irish in the US was discussed.

Speaking to the media afterwards, Mr Varadkar said Mr Trump brought up the issue during their meeting and signalled his support for a deal for the undocumented Irish.

“There was support and a good degree of enthusiasm from the administration to work on a solution for the thousands of undocumented Irish that are here but are hardworking, taxpaying people who are very loyal to America.”

Mr Trump has traditionally taken a hardline approach to immigration, but the Taoiseach proposed a reciprocal arrangement whereby American citizens could be given reciprocal rights in Ireland.

Mr Varadkar described the meeting, which was also attended by vice president Mike Pence, as a “good meeting”.

He said no date had been set for a visit by Trump to Ireland, adding that he had discussed Mr Trump’s property in Doonbeg. (If reading this on the app, click here to participate in a poll on whether Ireland should extend a welcome to Donald Trump.)

“We also had an opportunity to talk about the Border. The President was very aware of the issues that affect Northern Ireland, and if there is a return to the hard border, and the president Is think is very much on our side in terms of looking for a solution.”

Mr Varadkar said the president had raised his concerns about trade, and particularly America’s trade relationship with China.

“I put across to him that maybe the best way would be a new deal, a new trade deal between America and Europe.”

In his brief comments to the media, Mr Trump said the Border in Northern Ireland was an “interesting border”, and it was somewhere he planned to visit.

He said the US relationship with Ireland was “outstanding and only getting better”, adding: “It’s my honour to have the very popular Irish Taoiseach with us.”

The Taoiseach said he would be visiting New York to attend the St Patrick’s Day parade on Saturday. Mr Trump joked that he used to watch it all the time in New York.

Mr Varadkar said that, while he had been in Washington as a congressional intern, he had never previously made it to the Oval Office.

Speaking later on Thursday, Mr Trump invited Mr Varadkar back to the White House next year as he praised the strength, grit and resilience of the Irish people.

Speaking at the annual shamrock ceremony at the White House, Mr Trump noted that 30 per cent of Americans – 10 per cent of the population- traced their ancestry to Ireland

“Our shared bonds are traced back through generations,” he said , describing the Irish as “proud and faithful people”.

Mr Varadkar said he and the president had held a productive meeting earlier and that “by talking and listening we both learned things that will help move forward our countries together”.

To applause, he stressed the investment that Irish firms bring to the US.

Speaking to RTÉ Six One, Mr Spicer said: “There’s an opportunity; he has talked aboutgoing to the UK. It would make natural sense that he would make a stopover there. He’s got a golf course there. I say that not just because he has a property there but because he has an affinity with Ireland, the UK and Scotland.”

Of Ireland, “he would love to go there," Mr Spicer said. “The Irish people would give a very warm welcome to another American President visiting.”

Mr Varadkar was to hold a separate meeting with Pence on Thursday when Mr Pence attends the annual Speakers’ Lunch at the US Capitol.

While Mr Pence was to meet the Taoiseach at his residence on Friday morning for breakfast, there will be no public remarks from both men following that event, in a break from tradition. Instead media coverage will be limited to the Taoiseach’s arrival at the residence.

The Taoiseach earlier this week said he would raise the issue of gay rights with Mr Pence who is known to be a conservative.

Asked if he would raise the issue of Mr Pence’s alleged support for the practice of “conversion therapy” for gay people, Mr Varadkar said: “I am told Vice President Pence is not a supporter of conversion therapy even though some people have mentioned he is... I am going to be meeting him over breakfast on Friday morning, so if I have the opportunity I will certainly be mentioning the wider issue of equal rights and freedoms for LGBT citizens.”

Speaking on Wednesday night ahead of his meeting with Mr Trump, Mr Varadkar described how American values had shaped his own life and values.

Addressing the annual Ireland Funds Dinner in Washington, Mr Varadkar said American dreams and values which had spread across the world had meant “that a young boy growing up in Ireland, with an Indian father and an Irish mother, could dream of one day becoming the leader of his country, believing that the time would come when people would be judged on their principles and their ideals, on the content of their character and the quality of the work, and not on their sexuality or the colour of their skin.”

He said that these were “our Irish values today.”

“We believe in equality before the law for all citizens, irrespective of gender, religion, race or sexual orientation. We believe in free trade and free enterprise. We champion free speech and freedom of association, and we are proud to assert that democracy and multi-lateralism are the best way of solving the world’s problems.”

The issues of immigration, tax and trade policy were expected to top the agenda at Mr Varadkar’s first meeting with the US president.

Among the proposals to be discussed by the Taoiseach is a reciprocal arrangement whereby Ireland offers new work visas to Americans as well as protections to American citizens who want to retire to Ireland in exchange for protection for the undocumented Irish.

Currently, there are significant barriers to American citizens who want to move to Ireland, including certain financial and healthcare requirements.

Mr Varadkar also confirmed he would extend an invitation to Mr Trump to visit Ireland, despite stating last year that he “wouldn’t invite him”.

“The invitation that Taoiseach Enda Kenny made to Donald Trump stands. Donald Trump has invited me to Washington DC. I’m here this week. He’s going to invite me to his house, and I think it’s absolutely appropriate normal hospitality that when someone invites you to their country, their house, you reciprocate with an invitation,” he said