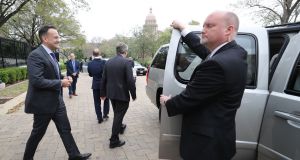 The annual exodus of Government ministers and officials for St Patrick’s Day Day events is well underway with the United States, as usual, topping the list of destinations.

Taoiseach Leo Varadkar leads the Irish invasion of America, and having attended events in Texas and Oklahoma, heads to Washington on Tuesday for the traditional meetings at the White House and Capitol Hill later this week. After Washington, the Taoiseach will go to New York for a series of engagements, including the St Patrick’s Day parade in the city.

Cabinet ministers Heather Humphreys and Michael Ring are also visiting venues in the US for the celebrations as are Attorney General Seamus Woulfe and junior ministers David Stanton and Michael D’Arcy.

Junior minister for the Diaspora Ciaran Cannon is our man in the city of Chicago for events there on Tuesday.

The remainder of the Americas is not left untended. Minister for Communications Denis Naughten is attending St Patrick’s Day festivities in Toronto this week, while the junior finance minister Patrick O’Donovan is also in Canada.

In the Far East, the junior minister at the Department of Agriculture Andrew Doyle is in Vietnam for the celebrations there.

People across the health service are working extraordinarily hard to make progress in what is a difficult week. I am in regular contact with HSE. It would not feel right to me as Minister to travel for St Patrick’s Day so I have made decision not to do so

Tánaiste and Minister for Foreign Affairs Simon Coveney is in Hong Kong where he will undertake a four-city tour culminating in Beijing. To mark the visit, which will encompass the substantial trade promotion element, the Chinese authorities will light the Great Wall of China.

Minister for Housing Eoghan Murphy is in Korea and Japan, while his junior colleague John Paul Phelan is in Singapore. Minister of State for Transport Shane Ross has made it as far as London.

Junior defence minister Paul Kehoe is visiting the Levant, where he will take part in engagements in Israel, Syria, Cyprus and Lebanon, including visits to Irish troops on UN duty in the region.

In the United Arab Emirates and Oman, junior education minister Mary Mitchell O’Connor will be flying the flag.

Europe minister Helen McEntee is in Austria and Slovakia, while minister of state for disability issues Finian McGrath travels to Czech Republic. Minister for Education Richard Bruton does Germany.

Minister for Health Simon Harris was due to attend events in the Netherlands and Belgium but has cancelled, while the Minister for Children Katherine Zappone will visit Rome for events, including an engagement in the Irish College there.

Minister for Culture Josepha Madigan has a programme of events in Oslo and Stockholm.

Minister for Agriculture Michael Creed gets the Brexit package, with a series of engagements all week in the UK, from where junior education minister John Halligan has just returned after events in Manchester and Liverpool.

The cathaoirleach of the Seanad Denis O’Donovan will visit Slovenia and Bosnia Herzegovina, while junior minister for digital development Sean Kyne goes to Switzerland.

Beyond Europe, junior minister at the OPW Kevin Boxer Moran goes to Kenya.

The Minister for Justice Charlie Flanagan will represent the Government at events in Australia, where his junior colleague Jim Daly also has a programme of events. Mr Daly will also visit New Zealand.