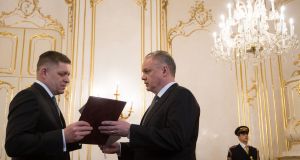 Long-serving Slovak prime minister Robert Fico resigned on Thursday, passing his government to a deputy after the murder of an investigative journalist provoked the country’s biggest protests since the fall of communism.

President Andrej Kiska asked deputy prime minister Peter Pellegrini to form the next government, opening the way for the three-party coalition to stay in power even though tens of thousands of Slovaks are demanding early elections.

The unsolved killing of 27-year-old reporter Jan Kuciak, who delved into fraud involving businessmen with political connections, has fuelled public anger over corruption and threatened to bring down the coalition before the party leaders agreed a change of guard.

Mr Fico vowed on Thursday to remain in politics as the active leader of his Smer party. Mr Pellegrini presented the president with a list of signatures showing coalition lawmakers supported the switch in prime ministers, guaranteeing a parliamentary majority. But Mr Pellegrini, a former speaker of parliament, will face his first test on Friday as the protests are scheduled to continue into a third week.

Organisers are demanding new elections and a thorough investigation of Mr Kuciak’s murder in late February. Mr Kiska himself had urged a government shake-up or snap elections to restore public trust.

“After two weeks of international shame, a denial of political responsibility and mass protests, we are back at the start, at a government resignation and change of prime minister,” Mr Kiska said before Mr Fico tendered his resignation to him.

Mr Fico had promised to step aside if Mr Kiska allowed Smer, the biggest coalition party, to pick his successor. The government will continue with Smer, the Most-Hid party which represents the ethnic Hungarian minority, and the Slovak National Party that has shifted to centre in recent years from the far right. Mr Fico will stay on as caretaker prime minister until his successor is officially named.

Mr Kiska and Mr Fico were opponents in the last presidential run-off vote and have battled again in the crisis. Mr Fico has accused outside forces of trying to destabilise the country and questioned Mr Kiska’s meeting last year with financier George Soros, echoing attacks on the Budapest-born billionaire by Hungarian prime minister Viktor Orban.

1 Coronavirus: Almost 60 new cases recorded in Italy as two die
2 Ryanair’s Michael O’Leary under fire for comments on Muslim men
3 The view from Clondalkin: If Sinn Féin don’t get in, ‘there will be marches’
4 Archbishop: Sex abuse of women by L’Arche founder ‘reprehensible’
5 Drug dealer loses codes for €53.6m bitcoin accounts
Real news has value SUBSCRIBE