Syria’s seven-year war: How Assad has kept his grip on power

While regime changes were made in Egypt and Tunisia, Syria’s conflict is more complex 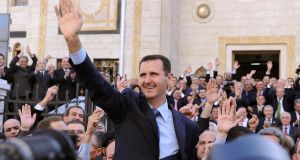 Seven years ago, Syrians inspired by Arab Spring uprisings in Tunisia and Egypt protested in Damascus and other Syrian cities, calling for democratic reform. The demonstrations, modest rather than massive, were dispersed by security forces. Unlike Tunisia and Egypt, which overthrew their presidents, Syria went to war.

The template of the uprising distinguishing Syria from Tunisia and Egypt was fixed on March 20th, 2011 in the southern city of Daraa, where armed men killed seven policemen and torched a courthouse and ruling Ba’ath party headquarters, eliciting a brutal response from Damascus.

Unrest in Daraa had begun on March 6th, when 15 teenagers were detained and beaten for writing on Daraa’s walls, “The people want the fall of the regime” – the slogan of the Egyptian uprising. Families and townspeople protested. Demonstrations and clashes erupted across Syria.

August 2011 was a decisive month. On August 18th, US president Barack Obama declared that “the time has come for president Assad to step aside” – extending legitimacy to efforts to topple him. Turkey, the US, Britain, Germany and France spearheaded the armed campaign to overthrow Assad.

The FSA and SNC were adopted by these external powers. The FSA, however, was only a logo for rebel and jihadi factions and did not develop into an army with overall command and control. Although recognised by the West and some Arab regimes as the representative of the Syrian people, the SNC never enjoyed popular support in Syria.

By the end of 2011, Syria’s protest movement had drowned in civil strife, which was overtaken by proxy wars involving regional and international actors. Turkey funnelled foreign fighters into Syria. Weapons were smuggled from Lebanon, where wounded fighters received medical care. Saudi Arabia, Qatar and Kuwait armed and funded insurgent groups.

While the Syrian army battled rebels in the suburbs of Damascus, rebels from the countryside seized control of eastern Aleppo, the poor sector of Syria’s most populous city and commercial hub. This was a major defeat for Damascus.

During 2012-13, al-Qaeda in Iraq introduced fighters from Jabhat al-Nusra and Islamic State, adding radical jihadis to the mix of hundreds of armed groups fighting in Syria.

The northern city of Raqqa fell to Islamic State. It declared Raqqa the capital of its “caliphate” and swept into Iraq where, in June 2014, the radical jihadis seized Mosul in northern Iraq. Shocked western powers took action, deepening external intervention.

In 2015, the overstretched Syrian army could no longer hold territory, forcing Russia to deploy its air force to provide cover for troops and Iran to dispatch ground forces, enabling Damascus to recoup losses. Eastern Aleppo and Deir al-Zor returned to government rule and Islamic State was routed from Raqqa and other areas by US-backed Kurdish forces and the Syrian army.

Today, the government controls 60 per cent of Syria, US-allied Kurds 25 per cent. Turkey a holds stretch of territory along Syria’s northern border and insurgents are confined to pockets under pressure from Syria’s army. Neither the civil conflict nor the proxy war has ended. While Assad is expected to stay on, his enemies have not given up the effort to remove him.

Why has he survived while the Tunisian and Egyptian presidents did not? Syrian protests never reached the critical mass attained in Tunisia and Egypt. Assad retained the support of the army, security forces, merchants and civil servants.

People power enabled Tunisia’s political elite to rid itself of corrupt president Zine al-Abidin Ben Ali and the Egyptian military of Mubarak, who had groomed as his successor his son, Gamal, a figure rejected by the generals.

When weapons of war were introduced and insurgents seized territory, Assad deployed full force against them, precipitating civil conflict. Protesters did not take up arms in Tunisia and Egypt, although hundreds died.

External powers intervened militarily in Syria, but not in Tunisia and Egypt.

Syrian rebel factions and the external opposition had no agreed figure who could replace Assad while preserving the army and state institutions. If he had been ousted, Syria would have fractured into warring fiefdoms. Tunisia and Egypt achieved a reshuffle at the top without major disruption.

Finally, in Syria, the jihadis who succeeded the rebels sought to transform Syria into an “Islamic state”, defined by their reactionary ideology and ruled by brutal men who behead dissenters.

The war for Syria has been for the survival of the country and its secular, pluralistic society. Jihadis with the same agenda remain a threat in Tunisia and Egypt.