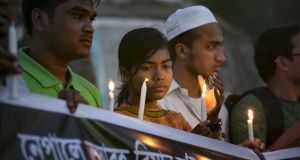 People attend a vigil for the victims of the US-Bangla plane crash in Dhaka, Bangladesh. Photograph: Allison Joyce/Getty Images

A Bangladeshi airline said on Tuesday its two pilots aboard the plane that crashed in Nepal killing 49 people had both received special training to land at Kathmandu airport and had successfully handled previous flights.

The airline and airport authorities in Kathmandu have blamed each other in the aftermath of Monday’s disaster, the Himalayan nation’s worst since the 1992 crash of a Pakistan International Airlines aircraft killed 167 people.

Flight operator US-Bangla Airlines said it was too early to blame anyone, after a transcript of the pilots’ radio conversation with ground control in Kathmandu revealed confusion over the designated runway.

Capt Abid Sultan and co-pilot Prithula Rashid died when their plane crashed short of the runway, broke into pieces and caught fire, officials said. “Sultan was experienced, quite familiar with the airfield and the aircraft,” US-Bangla spokesman Kamrul Islam said. “Rashid was also specially trained to make landings at the airport. This is mandatory for any pilot to fly over there. She also made landings at the airport before.”

Investigators have retrieved the flight data recorder from the wreckage, said Raj Kumar Chettri, the airport’s general manager, and an investigation had begun into the cause of the crash.

The Bombardier Q400 series aircraft was carrying 71 people from the Bangladeshi capital Dhaka when it tried to land in visibility that weather officials said exceeded 6km, with cloud at one end of the runway and a light tailwind of six to seven knots.

A Nepali army official said one of the 22 survivors being treated in Kathmandu hospitals was to be discharged on Tuesday. Families of some of the victims mourned outside the hospitals. There were 33 Nepali passengers, 32 from Bangladesh, one from China and one from the Maldives.

US-Bangla said Capt Sultan, a former Bangladesh air force pilot, had landed more than 100 times at Kathmandu, where wind shear and bird hits are frequent hazards in the mountainous region. He had more than 5,000 hours flying experience and was specially trained to land at the airport, Mr Islam said.

The airline also denied a media report that the aircraft had skidded off the runway during a domestic flight in 2015, saying it “never, ever encountered any accident. It had no technical glitches.” – Reuters