British prime minister Theresa May has said that the UK will expel 23 Russian diplomats in response to a nerve agent attack on former spy Sergei Skripal (66) and his daughter Yulia (33) in Salisbury. Video: UK Parliament TV 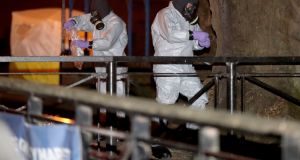 Police officers work at the scene of the poisoning of Sergei Skripal in Salisbury, England. Photograph: Christopher Furlong/Getty Images

Britain has expelled 23 Russian diplomats and suspended all high-level contacts between the two countries in response to last week’s attack with a nerve agent in Salisbury. Theresa May announced the expulsion of almost half Russia’s diplomats in Britain as part of a package of measures following the attack on former spy Sergei Skripal and his daughter Yulia.

She told MPs that Britain would not tolerate the threat to life on its soil from the Russian government, signalling that she is willing to deploy military and intelligence assets to combat what she described as hostile state activity. “We will deploy a range of tools from across the full breadth of our national security apparatus in order to counter the threats of hostile state activity,” she said, adding that some measures would remain secret.

Russia, which has denied any role in the Salisbury incident, described Britain’s response as unacceptable and threatened to retaliate in kind.

“There will be expulsions. As you understand in diplomatic practice, there will be answers from the Russian side,” Russian ambassador Alexander Yakovenko told Sky News.

Ms May will no longer engage with Vladimir Putin and she has revoked an invitation to the Russian foreign minister to visit Britain. And she confirmed that officials and members of the royal family would not travel to Russia for the football World Cup this year.

Powers used to prevent terrorists from entering Britain will be used against anyone suspected of “hostile state activity” or human rights abuses in Russia. And the prime minister promised to move against Russian criminals who have found a safe haven in Britain by freezing their assets and seizing the fruits of unexplained wealth.

Labour leader Jeremy Corbyn described the Salisbury incident “an appalling act of violence”, adding that it was utterly reckless to use a nerve agent in a civilian environment. But he said that Britain’s response should be guided by the rule of law and should include robust engagement with Russia.

“Britain has to build a consensus with our allies, and we support the prime minister in taking multilateral and firm action to ensure that we strengthen the chemical weapons convention and that this dreadful, appalling act never happens again in our country,” he said.