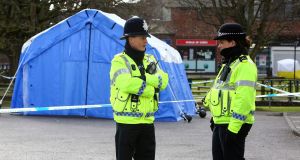 British police officers stand on duty at a cordon near a bench covered in a protective tent, at The Maltings shopping centre in Salisbury, southern England, where Sergei Skripal and his daughter were found on March 4th. Photograph: Geoff Caddick/AFP/Getty Images

If the Russians are worried about being blamed for a nerve agent attack on British soil 10 days ago, they are not showing it.

British prime minister Theresa May has said it was “highly likely” that Russia was behind the poisoning of former double agent Sergei Skripal and his daughter with the military-grade substance.

Listen to the podcast

On today’s World View podcast, Denis Staunton has the latest from London, where May’s midnight deadline for answers will not be met, as Russia demands to analyse the substance before issuing any statement.

World View is a regular podcast from ‘The Irish Times’. Subscribe on Apple Podcasts, on Android, on Stitcher, on ACast or on Soundcloud.