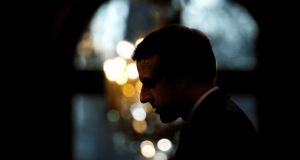 French president Emmanuel Macron’s reluctance to get involved in the Israeli-Palestinian conflict contrasts with his energetic diplomacy on other issues. Photograph: Yoan Valat/Reuters

French president Emmanuel Macron is travelling to Jerusalem to participate in the commemoration of the 75th anniversary of the liberation of the Nazi death camp at Auschwitz.

Other speakers at Thursday’s ceremony at the Holocaust memorial Yad Vashem will include US vice-president Mike Pence and Russian president Vladimir Putin. Donald Trump’s son-in-law Jared Kushner, who oversees US policy on Israel-Palestine, will also attend.

In his speech at Yad Vashem, Macron will talk about the French battle against anti-Semitism. An Ifop opinion poll published on Monday showed two-thirds of Israelis think France is not doing enough about it. Only 22 per cent of Israelis want France to play a role in Israeli-Palestinian negotiations.

Some French measures intended to fight anti-Semitism have been widely questioned on the grounds they violate freedom of speech and misconstrue legitimate criticism of Israel to be anti-Semitic.

Support for the Boycott, Divestment and Sanctions (BDS) campaign was made a criminal offence in France before Macron came to office. Last month, the French National Assembly passed a symbolic resolution saying that anti-Zionism is a form of anti-Semitism, an equation which Macron has repeatedly made.

The Israeli foreign ministry issued a press release saying, “The adoption of the resolution came after many months of diplomatic efforts by the Israeli embassy in Paris.”

The ambiguous meaning of Zionism is a problem, says Piotr Smolar, the author of Un Mauvais Juif, an account of his experience as Le Monde’s Israel correspondent from 2014 until 2019.

“The term anti-Zionism is a many-sided trap that can mask anti-Semitism,” says Smolar. “Anyone using the word Zionism or anti-Zionism should immediately explain what they mean. Are they referring to the very existence of Israel, to its right to self-determination? Or territorial expansion in the West Bank?”

Macron will meet with prime minister Binyamin Netanyahu on Wednesday morning, followed by meetings with President Reuven Rivlin and Benny Gantz, the Israeli opposition leader who may replace Netanyahu after the March 2nd Israeli elections.

On Wednesday afternoon, Macron will travel to Ramallah for talks with the president of the Palestinian Authority, Mahmoud Abbas. Abbas was elected 15 years ago, and has reneged on promises to hold elections, a source of concern to the French and other Europeans.

Martin Konecny, the Czech director of EuMEP, a small independent think tank in Brussels which specialises in European policy on the Israeli-Palestinian conflict, hopes Macron will exert pressure on Abbas to schedule elections, with the goal of healing the divide between Fatah in the West Bank and Hamas in the Gaza Strip. Otherwise, he predicts, “the Palestinians will continue to be weak, divided and demoralised.”

Macron’s reluctance to get involved in the Israeli-Palestinian conflict contrasts with his energetic diplomacy on other issues.

This is in part because “the Palestinian question has been downgraded to second, third or fourth rank in international priorities,” Smolar explains. It is no longer of central importance to Gulf Arabs, who are more preoccupied with Iranian expansionism.

“The Israelis do not want to talk about the Palestinian issue, since they have reduced it to a security matter. With France, they would rather talk about Iranian expansion and the JCPoA [nuclear accord], anti-Semitism and terrorism,” says Smolar.

Macron’s belief that “there are only blows to take” mediating between Israelis and Palestinians is a another reason, says Smolar. “His is a cold, cost-benefits analysis. He doesn’t underestimate the importance of this historic conflict, but the margin for manoeuvre is extremely narrow.”

Yet Europeans look to France to take action, says John Lyndon, the Irish executive of the Alliance for Middle East Peace (ALLMEP). “President Macron has clearly positioned himself as the EU’s strongest voice in foreign policy,” he says. Lyndon suggests Macron might usefully “breathe life back into the 2002 Arab Peace Initiative, which most Israelis are not fully aware of”.

Post-Brexit, Germany and France will be the two most powerful countries in Europe, notes Konecny. “For historical reasons, the Germans don’t want to be seen to push the Israelis. That leaves the leadership very much to the French. But Macron is more interested in Iran, Syria and Libya . . . Nothing major will happen on this without French leadership.”

Nine EU governments have recognised the Palestinian state, six when they were members of the former Soviet bloc, plus Cyprus, Malta and Sweden. Nine parliaments, including those of France and Ireland, have also done so.

Greater European recognition of Palestinian statehood “would strengthen the Palestinians’ status under international law, and it could help them to challenge Israeli policy in the occupied territories more forcefully,” says Konecny.

Macron has said it would not be “useful” for his administration to recognise Palestine. “Unfortunately, I don’t see the French anywhere near moving on this. That’s a problem not only for France, but more widely for Europe,” Konecny says.

Since Macron took office, the Trump administration has recognised Jerusalem as Israel’s capital and the Golan Heights, which Israel seized from Syria, as part of Israel. The US broke with decades of diplomacy last November when it said Israeli settlements in the West Bank are not illegal.

A close adviser to Macron says the French leader is waiting for an Israeli prime minister “who can re-engage on this agenda” and for the support of other Europeans, Russia and the UN Security Council.

Other observers feel greater urgency. “On the ground, it’s two minutes to midnight,” says Smolar. “I mean the soon irreversible character of annexation.”

Europe’s inaction vis-à-vis the Trump administration’s Middle East role is more important than the question of recognition, Konecny says. “The Americans are active in completely disrupting, destroying the international framework based on international law and the two-state solution,” he says.

“We Europeans are doing very little to counterbalance this extremely destructive American role under Trump. It is partly because of Macron’s unwillingess to prioritise this issue.”