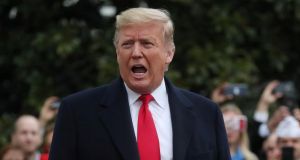 US president Donald Trump’s legal team argues that the articles of impeachment “do not remotely approach the constitutional threshold for removing a president from office”. Photograph: Leah Millis/Reuters

The impeachment trial of US president Donald Trump begins on Tuesday in Washington, amid a renewed push from the Republican-controlled Senate for the process to be swift.

A 171-page brief released by Mr Trump’s legal team on the eve of the trial called for the president’s acquittal, denouncing the impeachment process as a “rigged process”, and “a brazenly political act by House Democrats that must be rejected”.

The document argues that House Democrats “settled on two flimsy articles of impeachment that allege no crime or violation of law whatsoever – much less ‘high crimes and misdemeanours,’ as required by the constitution.”

“They do not remotely approach the constitutional threshold for removing a president from office,” it continues.

The legal memorandum argues that the first article of impeachment brought against Mr Trump over his dealings with Ukraine last month – abuse of power – “is not an impeachable offence”.

The lawyers also describe the second charge – “obstruction of Congress” – as “frivolous and dangerous”.

“Democrats propose removing the president from office because he asserted legal rights and privileges of the executive branch against defective subpoenas based on advice from the department of justice. Accepting that theory would do lasting damage to the separation of powers.”

The brief is signed by a 12-strong legal team, including counsel to the White House and personal lawyers for Mr Trump, who will represent the president during the trial.

Among other allegations contained in the lengthy document is that House Democrats “denied the president any semblance of fair process” in the impeachment inquiry, and that US support for Ukraine against Russia “has increased under President Trump”.

Mr Trump is only the third US president to face removal from office through a Senate trial following his impeachment by the Democratic-controlled House of Representatives in December.

Democrats accuse the president of abusing the power of his office by pressuring Ukraine to investigate his political rival Joe Biden, and his son Hunter, who served on the board of a Ukrainian gas company while his father was vice-president.

They also argue that Mr Trump withheld already-sanctioned military aid from Ukraine as part of a quid pro quo in order to convince the Ukrainian president to publicly announce investigations.

The publication of the Trump team’s legal defence memo comes after the House impeachment managers issued their own document at the weekend setting out the case that Mr Trump’s activities relating to Ukraine constituted the “high crimes and misdemeanours” set out in the constitution as grounds for impeachment.

The team of managers, who will essentially act as prosecutors in the trial, visited the Senate floor on Monday, as they spent much of the day preparing for the next stage in the impeachment process.

With Republicans controlling 53 of the 100 seats in the Senate, and a two-thirds majority needed to convict the president, Mr Trump is widely expected to be acquitted. However, a battle is expected over whether witnesses and documents are subpoenaed.

Senate minority leader Chuck Schumer is expected to table an amendment calling for witnesses when Senate majority leader Mitch McConnell brings the trial resolution to the Senate floor on Tuesday.

As the top Republican in the upper chamber, Mr McConnell will have significant authority over how the trial is conducted, though technically the chief justice of the supreme court will preside over the hearings each day.

The 100 senators, who were sworn in by the chief justice, John Roberts, last week, will not be permitted to speak while the Senate trial is in session.

Tweeting before he left for the World Economic Forum in Davos, Switzerland, on Monday, Mr Trump noted that it was three years to the day since his inauguration as president.

“So appropriate that today is also MLK jr DAY,” he wrote, referring to Monday’s annual Martin Luther King federal holiday. “African-American Unemployment is the LOWEST in the history of our Country, by far. Also, best Poverty, Youth, and Employment numbers, ever. Great!”