‘Nobody likes him’: Hillary Clinton hits out at Bernie Sanders 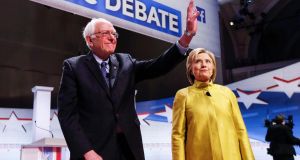 Then Democratic presidential candidates Bernie Sanders and Hillary Clinton at a primary debate in February 2016. “Nobody likes him, nobody wants to work with him, he got nothing done,” Clinton said in an interview. Photograph: Kamil Krzaczynski/EPA

Hillary Clinton, who battled with senator Bernie Sanders of Vermont for months in a 2016 Democratic primary that sometimes turned contentious, ripped into her former campaign rival in a new docuseries and declined to say if she would endorse and campaign for Mr Sanders if he were to win the presidential nomination this time around.

“He was in Congress for years. He had one senator support him,” she said in a forthcoming four-part series, set to premiere at Sundance and air on Hulu beginning March 6th. “Nobody likes him, nobody wants to work with him, he got nothing done. He was a career politician. It’s all just baloney and I feel so bad that people got sucked into it.”

Asked in an interview with the Hollywood Reporter, published on Tuesday, if that assessment still held, she said, “Yes, it does”.

And in response to a question about whether she would endorse and campaign for Mr Sanders if he were to get the nomination, she said: “I’m not going to go there yet. We’re still in a very vigorous primary season.”

The remarks had the potential to resonate, coming in the heat of a competitive primary season and as the Democratic Party worries about unity. – New York Times