Bossy, chain-smoking mother in drag a counterpoint to Bolsonaro’s stormtroopers 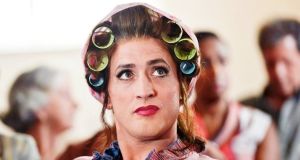 Dona Hermínia (played by comedian Paulo Gustavo), a housewife from Niterói, in My Mother is a Piece of Work 3. Photograph: Facebook

Brazil’s box-office wars this holiday season have seen the force desert the Skywalker clan. One of the galaxy’s most storied families has been bested in multiplexes across the South American nation by the unlikely figure of Dona Hermínia, a housewife from Niterói.

Her return in My Mother is a Piece of Work 3, whose Portuguese title is a pun that nods towards its origins on the stage, is still packing them in even as Episode IX – The Rise of Skywalker beats a full retreat from screens.

The Dona Hermínia Supremacy is easily understandable. She is a hilariously lippy, bossy, chain-smoking, divorced mother-of-three with curlers in her hair and (you’ve guessed it) a heart of gold. Picture a less lewd though somewhat cattier Mrs Brown speaking a mile a minute in Portuguese.

She is the creation of comedian Paulo Gustavo, inspired by his mother, whom he plays in drag. Many Brazilians clearly see something of their own mother in Dona Hermínia. Indeed the film’s producer Iafa Britz says her mother was somewhat disappointed to learn that it was Gustavo’s mother and not her that was the inspiration for the character.

Part of the appeal of the My Mother... films is down to Gustavo and his co-writers producing scripts packed with one-line zingers that he then nails on screen. And just in case viewers thought Gustavo’s highly kinetic performance in any way camps up his source material, home videos of his mother which accompany the final credits make clear his is actually a somewhat restrained interpretation.

The runaway success of the third film, starring a gay man in drag who dedicates it to his mother for always accepting him for who he is, as well as his husband and their twin sons, is all the more notable now that Brazil is passing through a reactionary political moment under far-right president, Jair Bolsonaro.

Previously explaining why he had vetoed an on-screen gay kiss, Gustavo said he was not an “activist”. And yet the first of the film’s two main plot lines centres around the pregnancy of Dona Hermínia’s daughter Marcelina after a one-night stand with a hippy who she then moves in with.

Despite being told with the series’ usual wit and warmth, this tale is unlikely to have impressed Damares Alves, Brazil’s current human rights minister, an evangelical pastor with plans to prevent teenage pregnancies by teaching sexual abstinence in schools.

The other major plot line sees the happy marriage of Dona Hermínia’s son Juliano to his boyfriend Tiago (Dona Hermínia’s delight at which is threatened when Tiago’s mother tries to hijack the preparations). This is likely to appeal even less to Bolsonaro.

The president is a notorious homophobe who got elected in part by falsely claiming his opponents were introducing “gay kits” in schools to promote homosexuality. Just last week, Bolsonaro had to sack his culture secretary Roberto Alvim after he plagiarised a speech by Joseph Goebbels when promising a Brazilian art “that will be heroic and will be national . . . Or it will be nothing”.

Alvim excused himself saying any similarities between his declarations and those of Hitler’s notorious minister of propaganda were mere “rhetorical coincidences”, an odd defence when political opponents are accusing the government of fascistic leanings.

We can assume Alvim did not imagine a national heroine like Dona Hermínia when he spoke of a heroic and national art. Bolsonaro has made clear his own disdain for the country’s cinematic output, and one of Alvim’s underlings even threatened to review Brazil’s film classification regime after learning My Mother . . . 3 was certified suitable for children aged 12 and over.

But such ideological disdain didn’t prevent the first lady, Michelle Bolsonaro, attending a screening in Brasília, though without her husband. The huge popularity of Dona Hermínia, with her inclusive take on family and life, offers a hilarious but important counterpoint to the exclusionary ultra-nationalist ideology of the current administration.

A comedy by itself is unlikely to lead to any immediate decrease in the country’s frightening levels of homophobic violence. Or force the country’s reactionaries off the political stage any time soon.

But its success hints at the fact that the future of Brazil does not necessarily belong to Bolsonaro and his ideological stormtroopers.