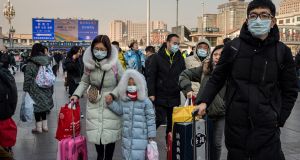 A person in Washington state has been infected with the Wuhan coronavirus, the first confirmed case in the United States of a mysterious respiratory infection that has killed at least six people and infected more than 300 in China.

The patient, who was hospitalised with pneumonia last week, recently had traveled to Wuhan, China, where the outbreak appears to have originated, federal officials have found. Investigators tested samples from the patient for the presence of the virus; positive results were received over the weekend. Officials declined to identify the patient, who was said to be quite ill.

There were fears of a wider spread intensifying as hundreds of millions of people in China prepare to travel this week to mark the lunar new year holiday.

The jump in cases comes days after authorities said the coronavirus can spread from one human to another, having previously said that they believed it could only jump from animals to humans.

In addition to the confirmed cases, hundreds of suspected sufferers were under observation, according to officials in Wuhan, capital of Hubei province, where a seafood and animal market is considered ground zero for the epidemic.

As China races to try to stem the outbreak, temperature checks have been set up to vet anyone coming into or out of Wuhan, a central Chinese city of 11 million people.

Airlines and booking platforms said they would allow travellers who have been quarantined or diagnosed with the virus to cancel or reschedule their travel arrangements for free, and they also offered free cancellations on any bookings made for Wuhan.

The Wuhan local government issued a notice on Tuesday to all its civil servants and employees of state-owned companies not to leave the city, and banned tour groups departing over the upcoming spring festival holiday, which starts on Saturday.

The annual holiday typically sees hundreds of millions of Chinese people on the move, returning to their home towns or travelling to holiday destinations to ring in the lunar new year.

Cases of the coronavirus have been confirmed domestically in Hubei province, Beijing, Guangdong, Zhejiang, Tianjin and Shanghai, while suspected cases have been reported in Sichuan, Yunnan, Shandong and Guangxi.

Thailand, South Korea, Singapore, Japan and Taiwan have also confirmed cases. Thermal screening measures have been set up in several international airports with direct flights to high-risk areas in China.

Officials confirmed this week that 15 medical staff in Wuhan were infected by the same patient, prompting fears “super-spreaders” of the virus could emerge.

The virus, known as 2019-nCov, is a coronavirus – one that infects the nose, throat and sinuses – and presents pneumonia-like symptoms. This pathogen is thought to be a new strain that has not previously been identified.

The World Health Organisation will hold a meeting on Wednesday to decide on recommendations to make with regard to the spread of the virus and whether to declare a public health emergency “of international concern”, as they have done in the past for emergencies such as swine flu and the Ebola epidemic.

The coronavirus has genetic similarities to Severe Acute Respiratory Syndrome (Sars), which also originated in China in 2002-2003, and resulted in 774 reported deaths in 37 countries. In that case Chinese officials initially tried to conceal the extent of the epidemic, but the cover-up was exposed by a whistleblowing senior doctor.

Researchers at the University of Hong Kong and at Imperial College in London have issued separate reports this week that both estimate the true number of coronavirus cases to be significantly higher than the official tally.

In his first public comments on the crisis, Chinese president Xi Jinping ordered resolute efforts to curb the spread of the virus, and called for the timely release of information and the deepening of international co-operation.

While transparency has been officially encouraged, anyone considered to be rumour-mongering faces criminal charges. Wuhan police announced earlier this month that eight people had been arrested in the city and charged for posting comments about the viral outbreak online, saying they had “spread rumours . . . and caused adverse social impact” and were subsequently “handled according to the law”.

The public security bureau message warned the public: “Do not create rumours, believe rumours or spread rumours. Build a harmonious and clear cyberspace.”