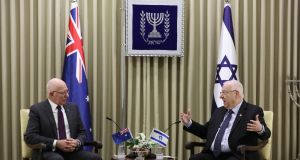 Israeli President Reuven Rivlin (right) with governor-general of Australia David Hurley at a meeting ahead of the World Holocaust Forum at the presidential residence in Jerusalem, Israel, on Tuesday. Photograph: EPA/Abir Sultan

World leaders are gathering in Jerusalem this week to commemorate the 75th anniversary of the liberation of the Auschwitz death camp.

President Michael D Higgins was unable to attend the event but did forward a letter of support to the gathering, organisers said.

A list of attendees was issued which initially included Mr Higgins’ name but the organisers stressed that this was a mistake.

A spokesperson for Yad Vashem rejected any suggestion of an Irish snub and noted that other dignitaries who had been invited were also unable to attend.

Despite the fact that Mr Higgins was unable to attend, Irish officials stressed the importance of the gathering and noted the President would travel to Poland next week for a commemoration event at Auschwitz.

Ireland also participated in last Sunday’s meeting in Brussels of the International Holocaust Remembrance Alliance which universally adopted a declaration honouring the victims of the Holocaust and committed to a world without genocide.

Established in occupied Poland during the spring of 1940, Auschwitz originally served as a concentration camp for Polish prisoners. After two years, it became Nazi Germany’s most deadly extermination camp. An estimated 1.1 million Jewish adults and children and over 200,000 Poles, Roma, Soviet POWs and others including homosexuals, perished there between 1940-1945.

According to Mr Rivlin, the purpose of the Jerusalem gathering was “to think about how to pass on Holocaust remembrance to generations who will live in a world without survivors, and what steps we must take to ensure the safety and security of Jews, all around the world”.

However, the organisers’ efforts to keep the event free from politics failed when Polish president Andrzej Duda boycotted the event after he was not included in the list of speakers.

“It turns out that presidents Putin, Steinmeier and Macron will be speaking, but the Polish president will not. I do not agree to this,” he said.

Mr Putin has accused Poland of collaborating with Nazi Germany and of having acted in an anti-Semitic way at the start of the war.

Mr Duda’s spokesman, Blazej Spychalski, said the president would have attended if he could speak. “[But] a situation in which the Polish president will sit and listen to the lying, false words of president Putin, without having the possibility to reply, is not good.”

Israel’s foreign minister Yisrael Katz, himself the son of Holocaust survivors, described the Jerusalem event as “the largest diplomatic event in the Israel’s history.”

Security is tight and Jerusalem residents are bracing for two days of traffic chaos with many roads closed off.