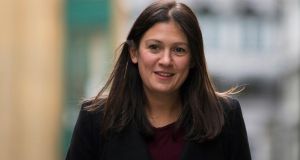 Lisa Nandy received a major boost in her attempt to become the next leader of the UK’s opposition Labour party after securing the support of the GMB union – just minutes after Jess Phillips dropped out of the contest.

The GMB announced on Tuesday afternoon, after hosting a hustings of the candidates, that it was backing Ms Nandy to replace Jeremy Corbyn as well as supporting Angela Rayner for the deputy leadership.

“Lisa Nandy is a breath of fresh air in the debate over Labour’s future,” said Tim Roache, GMB general secretary. “The more members see of Lisa in this contest the more impressed they will be by her ambition, optimism and decisive leadership.”

The GMB, which largely represents heavy industry, is one of the three biggest unions alongside Unite the Union and Unison.

Ms Nandy served as shadow energy secretary in the early months of Mr Corbyn’s leadership but resigned amid a wider rebellion by shadow ministers in the summer of 2016. Since then the MP for Wigan has co-founded a think tank called the Centre for Towns while pushing for her party to accept a soft Brexit.

Ms Nandy, a former charity worker, has always been close to the unions and is from the “soft left” of the party – although her emphasis on respecting the Leave vote has set her apart from many Labour members and MPs.

On Tuesday she said she was “proud” to receive the group’s support and said that if she was leader she would enable Labour to “up our game, recover our ambition and inspire a movement”.

Ms Phillips said she was giving up because she had concluded that the next leader had to be able to unite the whole Labour movement. “That person is not me,” she added.

The backbench MP for Birmingham Yardley had been struggling to win crucial support from unions and constituency Labour parties, without which candidates cannot proceed to the final stage of the contest, the vote among the membership.

Unison and Usdaw have already backed Sir Keir while Unite is widely expected to endorse Ms Long Bailey on Friday.

Ms Phillips, who had the backing of 23 MPs – just one over the threshold of 22 – was seen as the most “Blairite” of the candidates, a reference to former prime minister Tony Blair, because of her regular criticism of Mr Corbyn on issues such as his failure to stamp out anti-Semitism among some members.

In reality, however, the self-avowed socialist quit Labour during the New Labour period, saying recently of her family: “We all left over Blair and Iraq.”

Confirming her departure from the race, she said that Labour needed a leader to unite every part of the movement, from the membership to MPs. “In order to win the country, we are going to have to find a candidate, in this race, who can do all of that, and then take that message out to the country.”

Ms Phillips, who has a large social media presence, had pitched herself as the candidate who – with her working-class background and outspoken persona – could challenge Boris Johnson’s claim to be the “people’s prime minister”.

She had previously said that if she did not make the shortlist for leader she would back one of the other female candidates.

Sir Keir, former director of public prosecutions, is the only candidate to have qualified for the membership ballot, which opens on February 21st and closes on April 2nd – with the result announced two days later. – Copyright The Financial Times Limited 2020