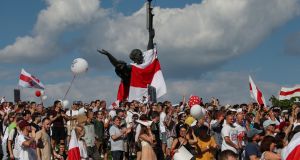 Autocratic Belarusian leader Alexander Lukashenko has turned to Moscow for help as hundreds of thousands of protesters called on him to resign for allegedly rigging elections and using police violence to crush peaceful dissent.

Belarusians took to the streets in unprecedented numbers on Sunday, unbowed by a brutal crackdown in which two people died, hundreds were injured and thousands were detained following an August 9th presidential election that Mr Lukashenko claims to have won with an implausible 80 per cent of votes.

Opposition leader Svetlana Tikhanovskaya says she was the real winner, and her people’s extraordinary response to her call for protest and strike action has plunged Mr Lukashenko into the biggest crisis of his 26-year rule – and raised the spectre of another potential geopolitical clash between Russia and the West.

The Belarusian leader claims foreign forces are trying to oust him and, after warning that unrest in his country of 9.5 million could have an impact on neighbouring Russia, he spoke twice over the weekend with its president, Vladimir Putin.

Mr Lukashenko said on Saturday they had agreed that “at the first request, Russia will provide comprehensive assistance to ensure the security of Belarus in the event of external military threats”.

The Kremlin said after Sunday’s conversation that Russia noted “external pressure” on Belarus and “reaffirmed its readiness to offer the necessary assistance to resolve problems that have arisen” in the country.

Mr Lukashenko (65) said he was concerned by Nato troop movements in Poland and Lithuania, two of Belarus’s western neighbours, and announced the deployment of an airborne assault brigade to the border region. Defence officials, meanwhile, said military exercises would be conducted in that area from Monday.

Nato insisted it was not building up troops in the area, but was “closely monitoring the situation in Belarus”.

In Lithuania – to which Ms Tikhanovskaya fled last week after allegedly being threatened by Mr Lukashenko’s regime – foreign minister Linas Linkevicius said the “former president of Belarus” was seeking a pretext to call for Russia’s help, and asked if he intended to use it “against . . . people carrying flowers on the streets?”

Several thousand people gathered on Sunday in the centre of the Belarusian capital, Minsk, to hear Mr Lukashenko accuse his opponents of plunging the country into chaos, to deliver it into the hands of their foreign “puppet masters”.

“You came here to . . . defend your country, independence, wives, sisters and children,” he told the crowd. “Belarusians, use your head before it’s too late – today – or tomorrow someone else will think for you.

“Despite all difficulties and shortcomings, we built a beautiful country. If someone wants to give it away I won’t allow that, even when I’m dead,” he declared in a rambling and sometimes bizarre speech.

“They’re offering us a new government that they formed abroad . . . They are offering us Nato soldiers, black-skinned, yellow-mouthed, fair-haired. They want to dress us in peasant shoes and whip us around. Surely you see that! If someone wants that, then do it without me. I will never destroy our state.”

Despite bussing many state workers into Minsk for the event, Mr Lukashenko’s rally was dwarfed shortly afterwards when an estimated 200,000 people joined the biggest protest in Belarusian history. At the same time, tens of thousands of people demonstrated in other towns and cities nationwide.

They demand that Mr Lukashenko hand over power to Ms Tikhanovskaya (37), who they are convinced won an election that the EU says was neither free nor fair.

The former teacher – who spent several childhood summers in Roscrea, Co Tipperary with other people affected by the 1986 Chernobyl nuclear disaster – entered politics reluctantly when her husband, a popular opposition blogger, was jailed in May.