‘It’s like a war’: Belarusians describe terrifying week of crackdown

August 14th, 2020: Tens of thousands of people have taken to the streets in Minsk, Belarus demanding that Lukashenko step down, joined by workers at some of the state-owned industrial plants that are the centrepiece of his Soviet-style economic model. Video: Reuters 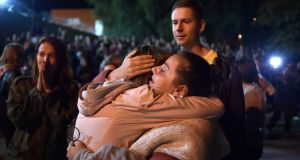 A woman hugs a relative released from the Okrestina prison, Minsk after being detained during protests this week. Photograph: Sergei Gapon/AFP via Getty Images

Twenty-three-year-old Danya* was sitting with her brother and his wife in Minsk’s Independence Square on Monday, when men dressed in black forced them into a van.

The trio were wearing white ribbons, symbols of resistance to the re-election of Belarus’s president, Alexander Lukashenko, which has been widely condemned as fraudulent. The official election results, released the day before and disputed by protesters, showed that Lukashenko took 80.23 per cent of the votes, while his opposition challenger, Sviatlana Tsikhanouskaya, received only 9.9 per cent.

The men forced the group to remove their ribbons, and told them that if they appeared on the square again, they would be immediately jailed.

“When they took us, I did not understand why, and of course I was scared,” she told the Guardian via a communication app. “They kept us for about 20 minutes, then they let us go, but my brother said ‘Belarus lives’, and he was captured again and taken away. Later he called, and told me to come to a bus stop. The men were there, and they took my phone, started looking through the photos, and told me I was voting for the wrong person.”

Earlier in the week, the country’s internet was switched off, a move activists said was aimed at silencing them and preventing them from organising. Hundreds of people using VPN and messaging apps got in touch with the Guardian in response to a call-out for their experiences.

“I want people to know the truth,” Danya said. “We are scared to go out and we need any help.”

According to Minsk residents, thousands of people are still in custody, having been arrested while peacefully protesting against the election result. Many say the detainees are being tortured, with 20 or even 50 people being held in cells designed for just four. Others have said the detainees were being denied food.

Official figures showed 6,000 people had been held as of Wednesday morning, but reporters on the scene suggested this had increased to about 7,000 overnight.

Katina*, a lawyer in Minsk working to support those arrested, said: “Lots of people are being captured. There are people who go out to throw out the trash, but because they don’t have their passports, are detained. We do not know where they are.

“People are released from prisons at four or five in the morning, and their belongings aren’t returned to them. The volunteers waiting for them can’t go near the prison or the site of the arrest, or they’ll be detained too.

“Yesterday, they started to stop cars and beat and arrest the drivers,” she added. “When they beat people they are doing it in front of others because they want to spread this fear around.”

Katina is helping set up a platform to connect lawyers, working pro bono, with those who have been detained. “For those lawyers, it’s a huge risk. Before, they were risking their licence, now they’re risking their lives,” she said.

Katina also said that those who opposed the election result had been fired en masse from their jobs. “Some people have been fired from police and prisons because they’ve refused to carry out orders, or for starting small initiatives [to help detainees]. Lots of teachers were fired because they refused to sign the protocol regarding election results,” she said.

“We don’t know how many, we think hundreds and thousands. It mainly started after the election, but it was happening before if people were showing support for independent candidates.”

According to accounts from those at the scene, protests have shrunk as police brutality mounts.

Katina said that on Sunday, Monday and Tuesday, people “had hope and belief for future changes”, but this had dwindled. “It was so beautiful, and then they were scared to death,” she said.

One of those “angry and scared” by events is Anastasia*, who fled Minsk on Tuesday with her husband after her IT firm’s offices were evacuated following raids on nearby companies.

Colleagues encouraged her to delete all social media and browsing history, after reports that authorities would seize phones and use Facebook groups or the news sites people had been accessing as evidence to detain them.

Protests have unfurled around the couple’s city-centre apartment. “On Sunday night, after the election results were released, we saw a lot of people walking in crowds down the street. Just walking, that’s it, and cars were honking,” she said.

“Then we saw the cars of the special forces, cars I’ve never seen before in my life, with huge shields in front of them to disperse people, and then black cars without number plates came. We saw the doors open, and special forces started to come out of them, and chased the protesters down the street. One guy was chased and beaten, and then they took him into a car and left.”

In the reflection of her windows, Anastasia saw explosions, “like fireworks”, and heard shots. Like others who spoke to the Guardian, Anastasia said armed teams had been arriving in ambulances to get close to protesters without arising suspicion, before jumping out and arresting them.

“They just detain people, they don’t need a particular reason,” she said. “If they want to do it, they’re going to put you in prison. There is no law there anymore, the law doesn’t work.”

For hours on Thursday, Viktar*, who had been an independent observer in the elections, stood with hundreds of others in a chain snaking across the capital. He said activists linked arms in silent protest.

Viktar said he had seen the fraudulence of the election for himself: at some polling stations he and his team of observers had counted and photographed the number of voters, but when they checked their figures against official electoral commission data, hundreds of votes appeared to have been added.

He said ballots had also been seized by police and votes changed to those for Lukashenko. “There is nowhere to get for help to the people of Belarus,” he said. “People are simply intimidated, because at the moment, almost every family has someone repressed in one way or another: beaten, kidnapped, or has seen these atrocities live where they live.”

“I was on one protest on Wednesday where the policeman were shooting rubber bullets at people and throwing grenades. There was a lot of blood,” he said. “Almost everyone was in this area was beaten or escaped.”

At the IT firm where he works, three people in his department of 12 have been detained, and two are still in prison.

*Names have been changed – Guardian