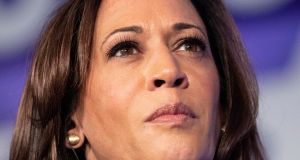 Senator Kamala Harris: named by Joe Biden as his running mate in the US presidential election. Photograph: EPA

Presumptive Democratic nominee Joe Biden has ended months of speculation by naming Kamala Harris as his running mate in November’s US presidential election.

The Biden campaign announced the decision on Tuesday afternoon, following a lengthy selection process involving a four-member committee that wrapped up its work in recent days.

The announcement comes ahead of next week’s Democratic National Convention, which will be a mostly virtual-only event. Mr Biden and Ms Harris are expected to appear together at a campaign event in Delaware on Wednesday.

Ms Harris is only the third woman from either major American political party to be selected as a vice presidential candidate – Walter Mondiale chose Geraldine Ferraro as his running mate in 1984, while John McCain selected Alaska’s Sarah Palin in 2008. Neither ticket was successful, however, with the result that the US has never had a female vice president.

While Mr Biden committed earlier this year to choosing a female running mate, he had been under pressure to also select a woman of colour, particularly in the wake of the death in police custody of African-American man George Floyd in May.

Ms Harris, who has Indian and Jamaican heritage, would also be the first black vice president, if Mr Biden beats President Donald Trump in November. She attended the historically-black Howard University in Washington DC.

Ms Harris campaigned for much of 2019 to become the party’s presidential nominee, finally dropping out of the race last December having failed to capitalise on the early enthusiasm around her campaign.

In a stand-out moment of last year’s primary season, Ms Harris confronted Mr Biden during the June 2019 debate about his past opposition to bussing – a policy that sought to improve racial integration in American schools in the 1970s by transporting children from less wealthy, minority districts to more affluent areas.

Ms Harris herself participated in a bussing programme as a child growing up in California. But despite her public clash with Mr Biden a year ago, her friendship with his late son, Beau, when both were attorneys general of their respective states, may have held her in good stead with the presumptive Democratic nominee.

Ms Harris had a long career as a public prosecutor in California – a track record that is likely to come under scrutiny in the coming months given the renewed focus on issues of systemic racism within the police force following the death of Mr Floyd.

She was district attorney of San Francisco for more than six years, and was then elected as attorney general of California in 2010, a position she held until she successfully ran for the US Senate in 2016.

She is married to Douglas Emhoff, a Los Angeles lawyer, and has two step-children.

In a letter to supporters, Mr Biden wrote: “You make a lot of important decisions as president. But the first one is who you select to be your Vice President. I’ve decided that Kamala Harris is the best person to help me take this fight to Donald Trump and Mike Pence and then to lead this nation starting in January 2021.”

Noting Ms Harris’s friendship with his son Beau, who died in 2015 from brain cancer, he said that his son had “enormous respect for her and her work. I thought a lot about that as I made this decision. There is no one’s opinion I valued more than Beau’s and I’m proud to have Kamala standing with me on this campaign”.

“Her record of accomplishment – fighting tooth and nail for what’s right – is why I’m choosing her. There is no door Kamala won’t knock on, no stone she’ll leave unturned, if it means making life better -for the people.”