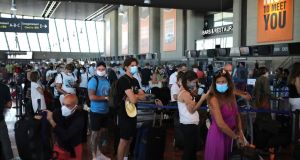 People queue in line to check in for a British Airways flight to Heathrow airport at Nice airport. Photograph: Daniel Cole/AP Photo

British holidaymakers in France scrambled on Friday to return to the UK before a newly imposed quarantine comes into effect following a rise in coronavirus infections.

Prices soared as people rushed to snap up the few remaining tickets for flights, trains and ferries to cross the English Channel before the deadline of 4am on Saturday.

The exodus came after Downing Street announced on Thursday evening that travellers coming from France, the Netherlands, Monaco, Malta, the Turks and Caicos Islands, and Aruba would have to self-isolate on arrival in the UK after sharp increases in Covid-19 cases in those countries.

Data from France over the past week has shown a 66 per cent surge in newly reported cases, while the Netherlands was up 52 per cent.

France is the second most popular holiday destination for British tourists after Spain, attracting 10.3 million visits in 2019, according to the government. Some 160,000 UK tourists were estimated to be in France on Thursday, and many of the 300,000 French citizens who live in the UK were also thought to have returned home.

The French government said it regretted the British move and would impose reciprocal measures on travellers arriving in France from the UK, although it did not specify when they would start.

Adele Armstrong (37), who works in the City of London, said she had spent €1,000 changing flights to return from Brittany on Friday, rather than Sunday as planned, because she and her daughter, partner and his two sons were due to go on another holiday to Scotland on Monday. They would have been forced to cancel if they had been quarantined.

“As soon as we heard the news, we went on the Ryanair website to change the flights . . . I could see the seats disappearing before my eyes,” said Ms Armstrong, who was visiting her mother, who lives in Brittany, for the first time in seven months. “We tried a computer and two phones and I think managed to get the last seats on the plane.”

Amelie, an investment banker who had been working and holidaying in Poitiers with her husband, said that after hearing the news at midnight on Thursday, the only two available Eurotunnel bookings were at 7am or 11.30am on Friday.

As she and her husband both had to return to the UK to work for compliance reasons. They were forced to rush back and leave behind their children, who were staying with grandparents in another part of France.

“The motorway was full but every other car had a British plate,” she said.

Veronique Michaud, the owner of the three-star Hotel Champs Fleurs in the popular Alpine village of Morzine, said some British families had cut short their stays and left in a frenzy on Friday morning. She added that she had received several cancellations for bookings this weekend and next week.

Some travellers decided to leave their cars behind in French resorts and fly back after all available ferries and trains were booked. Others could not afford to return.

“I suspected, as everyone did, that the UK government would impose a quarantine on France as it was on the cards since earlier this week, so I really should have booked an earlier flight, but I didn’t,” said Tim Crombie, a self-employed artist, in the French port city of Marseille. “I’ve tried to book a flight now but it would cost over €600.”

Eurotunnel, which runs car-carrying services through the Channel Tunnel, said it had laid on extra staff to handle the “huge amount” of inquiries. Shortly after the government announcement was made, travellers reported more than 4,500 people on Eurotunnel’s website.

Kasper Moos, head of UK routes for DFDS, which runs ferry services to France and Holland, said there was not enough space on their ships to cope with the demand, even though they had added more crossings.

“We are running out of slots for the weekend,” he said. “We can throw in as much capacity as possible but there is a limit.”

Grant Shapps, the UK transport secretary, told the BBC on Friday morning that people knew that there was a “significant risk” if they were travelling abroad.

He also warned that Britons would be “breaking the law” if they failed to quarantine for 14 days on their return.

Travellers arriving this week from Spain and Belgium, both of which had previously been removed from the “safe corridors” list, reported a mixed picture on quarantine enforcement.

Most reported being told to fill in forms detailing where they would isolate, but added that checks on whether they had complied were lax or nonexistent.

Officials in Paris said they expected the French requirements on British visitors to be the same as the “voluntary” self-quarantine applied the last time the UK imposed quarantines on people coming across the Channel.

“We regret the British decision, which will lead to reciprocal measures,” Clément Beaune, France’s Europe minister, wrote on Twitter.

Natacha Bouchart, mayor of Calais, called the British decision “another aggressive measure”. She told Francinfo radio: “One gets the impression the British government is panicking. I would have preferred that they require testing on departure and arrival.” – Copyright The Financial Times Limited 2020