Belarusian workers back protests to pile pressure on president Lukashenko

Belarusians demonstrated in Dublin on Thursday, bringing attention to the ongoing government crackdown in their country following the controversial re-election of Alexander Lukashenko. Video: John Cassidy 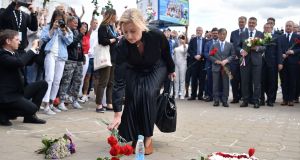 Sweden’s Ambassador to Belarus Christina Johannesson lays flowers at the site where a protester died in Minsk. Photograph: Sergei Gapon/AFP via Getty Images

Workers at major state factories in Belarus have gone on strike to support protests against Alexander Lukashenko, the country’s autocratic president of 26 years, which have continued for a fifth day despite mass arrests and police brutality.

Amid signs that Mr Lukashenko may be losing core support, several state media journalists resigned on Wednesday night and Thursday, and men claiming to be current or former police and military officers posted videos online in which they threw their uniforms into the bin and denounced a crackdown in which two people have died, more than 250 have been hurt and about 7,000 detained.

In the capital, Minsk, and other towns and cities, Belarusian women again formed human chains to call for peaceful change and an end to violence, ahead of another planned night of street protests and an extraordinary meeting of EU foreign ministers on Friday at which the crisis will be discussed.

Mr Lukashenko’s opponents accuse his regime of rigging last Sunday’s presidential election, at which he took an unlikely 80 per cent of votes according to the state count, and then coercing his main challenger, Svetlana Tikhanovskaya, to flee the country for neighbouring Lithuania on Tuesday.

Anger has grown across Belarus with the appearance of countless videos showing police beating unarmed protesters and attacking cars that sound their horns in support of the opposition, and accounts from detainees of being crammed into packed, filthy cells and subjected to severe abuse.

Dozens of journalists have also been detained. Russian reporter Nikita Telizhenko said he had been held for 16 hours in Minsk, and forced to walk over other detainees who lay on the floor of the cell with “pools of blood all around”.

“Severe beatings happened all around me. Blows, cries and screams came from everywhere,” he wrote. “It seemed that some detainees had broken bones – hands, legs or their spine - because they screamed in pain at the slightest movement.”

Such accounts appear to be eroding support for Mr Lukashenko (65) among sectors of Belarusian society that were considered his “base”, including the security services, employees of state media that pump out his propaganda, and staff at major industrial enterprises that are the mainstay of the nation’s economy.

Groups of workers at the Minsk automobile factory, Minsk tractor factory, truck builder BeLAz, the Belarus steel works and the Grodno Azot chemical and fertiliser giant all walked out on Thursday. It is not clear how long their strike action will last or how badly it will affect operations at the various plants.

“Leave before it’s too late, before you have plunged the people into a terrible abyss, into the abyss of civil war,” she told Radio Free Europe in comments aimed at Mr Lukashenko.

The former Soviet state farm boss, who claims foreign forces are trying to oust him and destabilise Belarus, has refused to resign and described the protesters as drunks, drug addicts and “people with a criminal record who are now unemployed”.