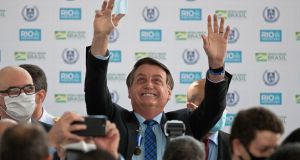 Brazil’s president Jair Bolsonaro holds up his mask during the Covid-19 pandemic after the inauguration of the new civic-military school in Rio de Janeiro, Brazil on Friday. Photograph: Silvia Izquierdo/AP

Historians will savage Jair Bolsonaro for leading Brazilians into a deadly “canyon” with his shambling, self-interested and anti-scientific response to Covid-19, according to his former health minister.

Luiz Henrique Mandetta has accused the Brazilian president of playing a “pivotal” role in steering Latin America’s largest economy towards a catastrophe. Mr Bolsonaro played politics with citizens’ lives at a time of global crisis, he said, as Brazil’s death toll rose to more than 105,000. Only the US has suffered more deaths.

Mr Mandetta, who has hinted he will challenge Mr Bolsonaro for the presidency in 2022, became a household name in the early stages of this year’s pandemic. He drew praise from left and right for his accessible, science-based alerts over the threat of coronavirus during daily press conferences.

A 55-year-old orthopedic doctor, Mr Mandetta was elected to congress in 2010 and has faced criticism for opposing the Mais Medicos (More Doctors) health scheme that sent Cuban doctors to remote and deprived parts of Brazil. He was named health minister in November 2018, shortly after Mr Bolsonaro’s shock election.

But he was sacked in mid-April after publicly challenging Mr Bolsonaro’s sabotaging of social distancing. Speaking from his base in the midwestern city of Campo Grande, he said the two had not spoken since.

On the day Mr Mandetta was fired, Brazil’s Covid-19 death toll stood at about 2,000. Four months later it has risen to more than 105,000 with the former minister one of many who blames Bolsonaro for the tragedy’s scale.

Mr Bolsonaro has repeatedly downplayed the pandemic, undermined containment measures, and attended protests and barbecues, using face masks incorrectly, if at all.

Mr Mandetta said the fight against Covid-19 had been fatally compromised by Mr Bolsonaro’s “utter contempt for science” – which saw him belittle the disease as a “little flu” and trumpet ineffective treatments such as the antimalarial drugs chloroquine and hydroxychloroquine.

“It’s interesting that he totally rejects science and mocks all those who speak of science. Yet when there’s any prospect of a vaccine he’s the first to come knocking on science’s door ... as if a vaccine would redeem him from his shambling march through this epidemic.”

Mr Mandetta also attacked Mr Bolsonaro’s “complete sabotage” of the health ministry. After Mr Mandetta and his team were evicted, another health minister, Nelson Teich, took charge but lasted less than a month after also clashing with the president over Covid-19. Since May the ministry has had an army general with no medical experience as its stopgap leader.

Mr Mandetta – who said he felt anguished and impotent about the situation – claimed that by forcing out specialists and surrounding himself by yes men, Mr Bolsonaro had lost touch with reality.

“When you’re in a situation where you surround yourself with people who say what you want to hear and not what is the truth – the leader ends up blinding himself to what is happening,” he said. “He listens but doesn’t hear. He looks but doesn’t see.”

The ex-minister suspected Mr Bolsonaro’s refusal to comfort grieving families reflected guilt over the realisation his actions had cost lives.

“He led the Brazilian people into a canyon in quick march and people have fallen off and died – and having to recognise that this was a mistake, that this caused pain, I think must be politically tricky for him right now.”

Perhaps once the tragedy was over Mr Bolsonaro might publicly express remorse, Mr Mandetta said. But how could Brazilians believe the words of a man who had “openly criticised those who sought to save lives”?

He warned that without an urgent change in direction the average number of daily deaths – which has been close to or above 1,000 for nearly three months – was only likely to fall in late September.

Mr Mandetta, who is from the rightwing party Democratas, has declined to confirm he will run for president but said Brazil needed a leader who could “pacify” the country after Mr Bolsonaro’s “toxic” term.

“I hope the leader who emerges victorious in 2022 is capable of rebuilding Brazil’s broken social fabric, giving this country a sense of unity – and accepting that it just isn’t normal to go around saying Brazilians like to roll around in the sewage.”

Mr Mandetta predicted Mr Bolsonaro would eventually pay a political price for “making a beeline down the path of denial”. But on Friday one of Brazil’s top pollsters found the president’s approval rating had risen to its highest level since he took office in January 2019.– The Guardian