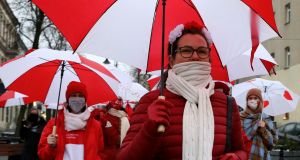 Belarusian president Alexander Lukashenko has called for deeper integration between former Soviet states, as the European Union imposed new sanctions on his allies and protesters prepared for another march against his autocratic regime.

Mr Lukashenko has turned to Russia for financial, diplomatic and security support amid the biggest demonstrations of his 26-year rule, which erupted when he claimed victory in an August election that opponents and the West say was blatantly rigged.

Several people have been killed, hundreds injured and more than 25,000 detained in a brutal police crackdown, and opposition figures have been jailed or forced to flee abroad, including opposition presidential candidate Svetlana Tikhanovskaya.

“Strengthening integration mechanisms in the post-Soviet space is not a matter of choice but an unavoidable necessity,” said Mr Lukashenko, who accuses the West of stirring up anti-government feeling in Belarus.

He told other leaders of the post-Soviet Commonwealth of Independent States (CIS) on Friday that greater economic co-operation would help its nine members “connect to each other, and then it will be very hard to tear one state from another”.

Mr Lukashenko has long been wary of integrating Belarus more deeply with Russia in their so-called union state – which would inevitably be dominated by Moscow – but now says they must work in lockstep to resist “western aggression”.

The EU imposed a third round of sanctions on Belarus on Thursday, targeting 29 officials and seven companies with close links to the regime, “in response to the brutality of the Belarusian authorities and in support of the democratic rights of the Belarusian people”.

Ms Tikhanovskaya, who is now based in Lithuania and travels Europe as a Belarusian “people’s president” in exile, collected the EU’s Sakharov Prize this week on behalf of her country’s pro-democracy movement.

“I have only one wish this year: I want every Belarusian who is now in jail, or was forced to live in exile, to return home,” she told the European Parliament.

“We call on Europe to be braver in their decisions and support the people of Belarus,” said Ms Tikhanovskaya, who insists she won the August election having decided to run following the arrest of her husband, an opposition blogger. “We are bound to win and we will win,” she added.

Despite police violence and arbitrary arrests, thousands of Belarusians still rally each weekend, and protest organisers announced a “march for a people’s tribunal” on Sunday to demand justice for crimes committed by the regime.

Archbishop Claudio Gugerotti, an envoy from Pope Francis, met Mr Lukashenko in Minsk on Thursday to express what the Vatican called the pontiff’s “concern about the current situation” in Belarus.

The head of the Belarusian Catholic Church, Archbishop Tadeusz Kondrusiewicz, was barred from the country in August after he condemned state violence and called for dialogue to resolve the crisis.