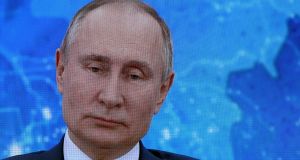 Russian president Vladimir Putin speaking during his annual press conference via a video link from the Novo-Ogaryovo state residence, in Moscow on Thursday. Photograph: Maxim Shipenkov

Answering a question on recent allegations made by investigative website Bellingcat, the Russian president said on Thursday that Mr Navalny’s attempts to oust him from power justified surveillance against his political rival. The news outlet reported on Monday that a group of Federal Security Service agents had tailed Mr Navalny on 37 trips in recent years – including when he was poisoned with the nerve agent Novichok in Siberia in August.

Mr Putin said Bellingcat was “legalising materials from American intelligence” by using phone metadata and travel records it bought on the black market, to tie the agents to a secretive forensic unit of the FSB, the KGB’s successor agency.

“If this is true, and I assure you it is, then it means that this patient from the clinic in Berlin is supported by secret services, in this case from the US. And if that’s the case, then that’s interesting, it means that [Russian] secret services must keep an eye on him,” Mr Putin said during his annual marathon press conference.

“But it doesn’t mean that he needs to be poisoned. Who needs him? If they wanted [to poison him] they would probably have finished the job,” he added.

Mr Navalny fell unconscious on a flight from Tomsk to Moscow and was later flown to Berlin’s Charité hospital, where he spent several weeks in a coma. Specialist laboratories in Germany, France and Sweden independently found traces of Novichok – the poison used in 2018 against former spy Sergei Skripal and his daughter in the UK city of Salisbury – in Mr Navalny’s system.

The Russian president made the comments while holding forth on questions from journalists and stage-managed appeals from members of the public at the residence outside Moscow where he has spent much of the pandemic in isolation. Mr Putin spoke via video-link, while the press sat in a conference centre in Moscow. Most of the 4½-hour conference was devoted to Russia’s declining living standards and increasing number of coronavirus cases, with Mr Putin insisting the country had suffered less than other countries.

Bellingcat alleged a group of FSB agents shadowed Mr Navalny across Russia starting in 2017, when he made an attempt to challenge Mr Putin for president, and tracked him in Novosibirsk and Tomsk in the days leading up to his poisoning.

Mr Navalny said he was convinced the alleged FSB operatives “took orders from the president of Russia, Vladimir Putin” and had “tried to kill him several times”.

Russia claims it found no traces of toxic substances in Mr Navalny’s system before he flew to Berlin and has variously intimated that he was poisoned in Russia by foreign agents, poisoned once he arrived in Germany, or deliberately ingested Novichok to draw attention to himself.

In a response to a question from the BBC correspondent about Moscow’s responsibility for poor relations with the west, Mr Putin said: “Are we white and fluffy? Compared to you, we are ... We are forced to react.” – Copyright The Financial Times Limited 2020