The European Union's chief Brexit negotiator Michel Barnier, addressing the EU parliament, says there is a possibility of a EU-UK trade deal being agreed, but that the path to such an agreement is "very narrow." Video: Reuters 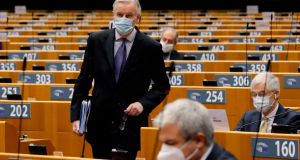 EU chief negotiator Michel Barnier arrives for a debate on future the relation between the EU and UK at a plenary session of the European Parliament in Brussels on Friday. Photograph: Oliver Hoslet/Pool/Getty

Negotiations to reach a trade agreement between the European Union and the United Kingdom are in the “last crucial hours” as a final effort is made to break an impasse over fish, Michel Barnier has said.

The chief EU negotiator told the European Parliament it was unclear whether an agreement would be reached in time for it to go into force on January 1st and avoid widespread disruption and tariffs on trade.

“It’s the moment of truth. We have very little time remaining, just a few hours... If we want this agreement to enter into force on the 1st of January,” Mr Barnier said.

“Nothing is agreed until everything is agreed, so it’s not surprising that with these last hours at our disposal we note that the negotiations have become extremely difficult. We’ve reached the hard nuts to crack,” he added.

Talks have resumed in Brussels with Mr Barnier’s UK counterpart David Frost to make a final push, after British prime minister Boris Johnson and European Commission president Ursula von der Leyen acknowledged there were outstanding differences in a phone call and instructed the negotiators to make a final try.

The European Parliament has set a deadline of Sunday for a deal to be reached, warning that it cannot ratify a deal in time for it to be in place on January 1st if it arrives any later than that.

One of the “main hurdles” in the talks is over whether the EU could retaliate if after an expected period of adjustment, Britain cut the access of EU fishing boats to UK waters in the future. The EU wants the deal to set out that it can react by introducing new barriers to some trade from the UK, particularly in fish products, if that were to happen.

“On a personal note I don’t think it would be fair or acceptable if European fishermen were not allowed following a transition period to have access to those waters when the rest of the agreement especially applying to companies would remain stable. That wouldn’t be fair, that wouldn’t be honest,” Mr Barnier said.

The EU has bid to agree ambitious social and environmental standards with the UK to ensure fair competition between companies. Agreement has been reached on a number of areas of security and co-operation, including extradition and sharing information on criminals, but this depended on UK commitments to human rights and protection of personal data, Mr Barnier said.

“I cannot say what will come during this last home straight of the negotiations, we have to be prepared for all eventualities.”

If no deal can be reached in time for its implementation on January 1st, there would nevertheless have to have future talks with the UK because it is a large and closely-connected country next door, Mr Barnier said.

“A country with which in whatever way shape or form we have to have an agreement. If it is not today because we don’t reach an agreement it will have to be later, and there will nevertheless be strong links,” he said. “We find ourselves in a very serious and sombre situation.”