Taoiseach hopeful for agreement but says ‘significant’ challenges lie ahead

The European Union’s Brexit negotiator has said that a trade deal is still possible with the UK and called it the "most important deal" with a third country in history of the EU. Video: Reuters 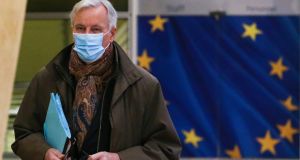 European Union Brexit negotiator Michel Barnier said on Monday that sealing a trade pact with Britain was still possible before the country’s final break with the 27-nation bloc on December 31st but the next few days of negotiations would be critical.

A senior EU diplomat who attended a closed-door briefing by Barnier on the state of play in Brussels said the tortuous trade talks could collapse but for now “the patient is still alive”.

“There might now be a narrow path to an agreement visible – if negotiators can clear the remaining hurdles in the next few days,” another EU diplomat said, adding that success depends on London accepting “inherent trade-offs” for a fair deal.

Britain and the EU agreed on Sunday to “go the extra mile” in coming days to try to reach an elusive trade agreement despite missing their latest deadline to avert a turbulent split in trading ties at the end of the month.

The next few days are important, chief EU negotiator Michel Barnier announced. He told reporters that negotiators would continue to talk with “calm and respect until the very end”.

“We are going to give every chance to this agreement... which is still possible,” Mr Barnier said has he prepared to update the 27 EU member states on progress in the talks in Brussels.

“Two conditions aren’t met yet. Free and fair competition... and an agreement which guarantees reciprocal access to markets and waters. And it’s on these points that we haven’t found the right balance with the British. So, we keep working.”

Taoiseach Micheál Martin has said it is a “hopeful sign” the EU and UK negotiators are continuing to talk but does not want to understate the “very significant challenges” ahead in Brexit talks.

“A lot has been done and it would be a terrible pity to lose all of that,” Mr Martin said on RTÉ’s Morning Ireland.

Mr Martin said: “The circle is going to be difficult to square but we need to stand back too from the high principle of this and say ‘Britain is a first-world economy, its economy has been integrated with the EU economy for the last 50 years’.

“I am not convinced that there is going to be a significant divergence in standards into the future.

“That said, people may seek advantage to supporting particular industries and sectors through state aid and that’s got to be dealt with and addressed through an agreement which would allow for a dispute resolution mechanism.

“I think most trade disputes have dispute resolution mechanisms within them and it’s not unusual to have that.

“In relation to negotiations around a trade deal and a future relationship agreement, that is strictly between Michel Barnier and their negotiating team and the British negotiating team.

Mr Martin said he had not spoken to British prime minister Boris Johnson over the weekend, but added it is important that good British and Irish relations continue after Brexit.

“We know that the Good Friday [Belfast] Agreement was founded on a very strong relationship between Britain and Ireland and the two governments and that will continue,” he added.

Commission spokesman Daniel Ferrie told a news briefing: “We’re of course aware that time is short. The more time that goes by the less likely it is that we will have a deal in place on the first of January, that’s just a statement of fact.

“I cannot say what may or may not happen over these days. But what I can say, though, is that we are fully dedicated to trying to reach a deal with the UK.”

European Union and British negotiators are on the “very last mile” in negotiations for a trade accord and the architecture in place is “fine” but details remain, the EU’s chief executive said on Monday.

“We want a level playing field, not only at the start but also over time ... this is the architecture that we are building,” she said. “We’re fine about the architecture itself but the details, do they really fit?”

In London, British business secretary Alok Sharma said the EU and the United Kingdom were still apart in Brexit trade talks but Mr Johnson did not want to walk away yet.

“We are of course apart on certain matters but...we don’t want to walk away from these talks,” Mr Sharma told Sky. “People expect us, businesses expect us in the UK to go the extra mile and that’s precisely what we’re doing.”

Mr Johnson and the president of the EU’s executive Commission on Sunday mandated negotiators to continue, although the British premier sounded a downbeat note on prospects for a breakthrough.

“Any deal that we get with the EU has to respect the fact that we are a sovereign country, an independent country and that’s the basis on which we will do a deal if there is a deal to be done,” Mr Sharma said.

French finance minister Bruno Le Maire said on Monday Britain has the most to lose from Brexit.

“The British people will be the biggest losers from Brexit,” he said, calling Brexit “a political, economic and historical folly”.

Britain is seeking to extend a post-Brexit grace period to all Northern Ireland retail that currently will exempt supermarkets bringing in food products from mainland Britain from additional checks, Britain’s minister for the region said on Monday.

A joint UK/EU committee working out how to implement the tailor-made Northern Ireland arrangements agreed last week to exempt supermarkets from completing export health certificates for three months and told them that there would be no change to current regulations around chilled meats for six months.

The main trade body representing wholesalers and independent retailers such as smaller convenience stores that compete with supermarket giants like Tesco, Sainsbury’s have demanded the same terms to avoid being put at a competitive disadvantage.

“Our view is that grace period should apply to retailers moving products from Great Britain into Northern Ireland and we are working to ensure we get that clarity as quickly as possible,” Brandon Lewis told BBC Northern Ireland radio.

“We are working with the EU to try and ensure that we can make this work for all businesses. Obviously the impact of the wider trade agreement has an impact on this as well.” – Additional reporting Reuters/PA