French President Emmanuel Macron has said that he was doing fine after testing positive for COVID-19, but was working at a slower pace while he convalesced at his home. 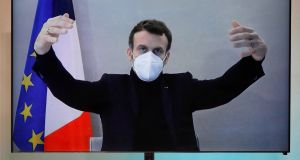 French president Emmanuel Macron has tested positive for Covid-19, becoming the latest world leader to be diagnosed with the disease and prompting several of his recent contacts at home and abroad to self-isolate.

Mr Macron was diagnosed after experiencing symptoms on Wednesday night, the Elysée Palace said, adding that he would isolate himself for seven days and “continue to work and carry out his activities remotely”. On Thursday, the president hosted a meeting on foreign aid and development by videoconference.

António Costa, Portugal’s prime minister, cancelled an official visit to Africa and began to self-isolate after lunching with Mr Macron in Paris on Wednesday. Pedro Sánchez, Spain’s prime minister, and European Council president Charles Michel, both of whom had lunch with Mr Macron at the Elysée on Monday to celebrate the 60th anniversary of the OECD, have gone into quarantine. The announcement on Mr Sánchez was made by his office less than an hour before he was due to appear with King Felipe VI at an exhibition.

They include the country’s prime minister, Jean Castex, who attended the weekly cabinet meeting at the Elysée on Wednesday. Mr Castex is self-isolating, although his office said participants were socially distanced and wore masks. Richard Ferrand, head of the National Assembly, the lower house of parliament, has also gone into isolation.

Mr Macron, who at the age of 42 is not considered a high-risk case, has cancelled all upcoming trips, including a planned visit to Lebanon, and his office is working to trace all contacts he may have had in recent days.

Elysée officials have yet to provide details on how Mr Macron was infected or the specific symptoms. His wife Brigitte is self-isolating and has no symptoms, according to the Elysée.

Mr Macron’s diagnosis comes as France is grappling with a second wave of the coronavirus pandemic that has killed more than 59,000 people in the country. France reported 17,615 new daily cases on Wednesday and 289 deaths.

Christophe Castaner, head of Mr Macron’s La République en Marche party in the National Assembly, said Mr Macron would be able to honour his commitments by working remotely. “We should take this as a lesson, and as something to encourage people to be careful,” he said.

France’s second nationwide lockdown, which was put in place in October, has cut the daily number of new infections and hospitalisations, but the slowdown has stalled in the past few weeks.

France ended that lockdown this week but imposed a night-time curfew instead to try to curb social gatherings that can spread infection. Restaurants and bars remain shut and France may have to push back plans to reopen them in late January if infections are not under control by then. – Copyright The Financial Times Limited 2020