Bethlehem’s locked-down Christmas: Technology and a message of hope 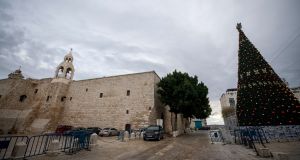 Christmas tree at Manger Square beside the Church of Nativity in Bethlehem, a city under total lockdown. Photograph: Atef Safadi

With Bethlehem under lockdown, this year’s festive period may be the gloomiest ever celebrated in the West Bank city.

Bethlehem is one of four West Bank districts where a lockdown was imposed by the Palestinian Authority in response to high Covid-19 infection rates but, putting on a brave face, mayor Anton Salman said Christmas would be observed this year in a unique manner.

“We resorted to modern technology and to the virtual world to celebrate the lighting of the Christmas tree, wishing hope and optimism will flutter upon Palestine and the world,” he said. “This Christmas from Bethlehem there will be a message of hope to the whole world that the world will recover from this pandemic.”

The main events, such as the entry of the Latin Patriarch and the traditional midnight Mass, will still go ahead but it looks like they will be limited to a small number of clergy.

Thousands of pilgrims and tourists typically visit Bethlehem and fill hotels over the Christmas season, bringing the area a much-needed economic boost. 2018 and 2019 were record years but no pilgrims will be allowed this year.

Elias al-Arja, chairman of the Arab Hotel Association, said he has been working in tourism for 30 years and this was the worst year he could remember.

Wadei Abunassar, chairman of the media committee of the Assembly of Catholic Bishops of the Holy Land, in a Zoom news conference hosted by Media Central, noted that Bethlehem had been severely affected by the pandemic in a number of different ways.

“Unemployment has shot up – up to 70 per cent of Christians in Bethlehem relied on pilgrims for their income. Donations are down and whereas the churches used to provide medicine for the local population, today the priority is to provide food.

“Thirdly, the ongoing lockdowns and closures around Bethlehem have prevented almost all visits to the city by Israeli Arabs. And finally, many people can no longer afford basic things such as school fees. Bethlehem is supposed to be the city of hope but it is now facing serious despair.”

Churches throughout the Holy Land have raised funds for Bethlehem families in need and parish priests but it’s an uphill battle.

Israel’s Covid-19 vaccination rollout is set to begin next week but it is not clear when the Palestinians will be able to follow suit.

Russia has promised the Palestinian Authority four million doses of its Sputnik V vaccine and Israel has also promised to transfer some of the vaccines it will purchase to the West Bank but it is not clear when they will arrive.

The Palestinians are also holding negotiations with both Pfizer and Moderna to get their vaccines. But even if a deal is reached with Pfizer, it will probably be for only a small amount, according to Palestinian health ministry officials, since the authority lacks the capability to freeze-store large quantities. It is therefore exploring other vaccine options that are easier to store.